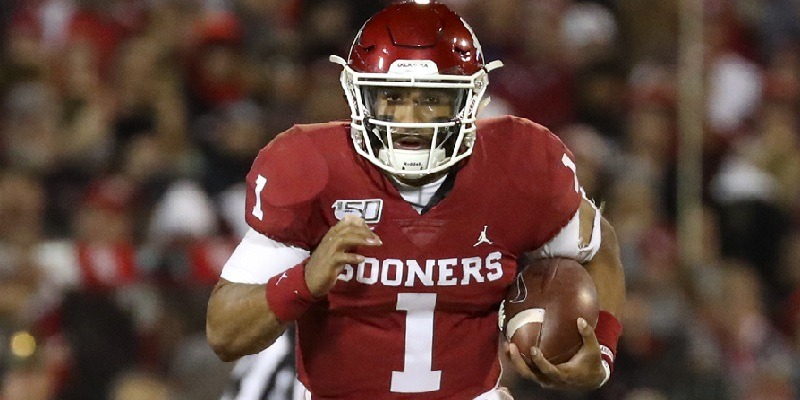 Adding protection for injury-prone quarterback Carson Wentz, the Philadelphia Eagles selected Oklahoma quarterback Jalen Hurts in the second round of the NFL draft on Friday.

Wentz has battled knee, back and head injuries over the last three seasons, failing to finish any of the three in the postseason. The 27-year-old North Dakota State product also had a broken wrist in college.

Welcome to the best football city in America brotha! https://t.co/CKAMNLO7mb

Hurts transferred to Oklahoma for his senior year after three impressive seasons at Alabama. He finished a distant runner-up in Heisman Trophy voting last year, behind LSU quarterback Joe Burrow, after completing 69.7 percent of his passes for 3,851 yards with 32 touchdowns and eight interceptions.

As a freshman at Alabama in 2016, Hurts led the Crimson Tide to a 14-1 record and a berth in the College Football Playoff championship game, won 35-31 by Clemson in the final second.

The following year, Hurts guided Alabama to a 12-1 mark and another berth in the national-title game. However, with the Crimson Tide trailing Clemson 13-0 at halftime, coach Nick Saban subbed in then-freshman Tua Tagovailoa at quarterback, and Alabama rallied for a 26-23 overtime win.

Hurts remained at Alabama as a backup in the 2018 season before transferring to Oklahoma for his final year of college ball.

In three seasons with the Crimson Tide, Hurts completed 62.9 percent of his passes for 5,626 yards with 48 touchdowns and 12 interceptions.

He was the fourth quarterback selected in the draft, the first taken in the second round.

Wentz’s backup last season with the Eagles was Josh McCown, who is currently a free agent at age 40. McCown took over when Wentz got hurt early in his postseason debut, Jan. 5 against the Seattle Seahawks, and he completed 18 of 24 passes for 174 yards in Philadelphia’s 17-9 loss.

Wentz was 1 of 4 for 3 yards in that game before exiting due to a head injury following a helmet-to-helmet hit. He had just appeared in all 16 regular-season games for the first time since his rookie year of 2016.