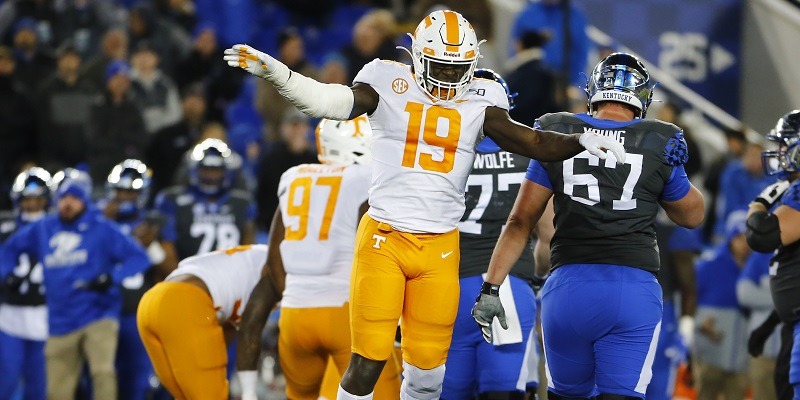 Taylor flashed potential as a redshirt sophomore at Tennessee in 2017 (three sacks, two forced fumbles) and became one of most productive SEC pass-rushers in the past two seasons with a combined 16.5 sacks and 21 tackles for loss. He forced six fumbles and broke up seven passes over his career.

Taylor accepted a Senior Bowl invite but was flagged for a stress fracture in his shin — which he played through during the 2019 season — and did not participate. He also sat out the NFL Scouting Combine.

Taylor is a quick-twitch edge rusher with the requisite length, strength and agility to handle dual DE/OLB roles in the NFL, as he did at Tennessee. Flashes an explosive burst off the snap when he times it right, zipping by college right tackles. Easy lateral mover, using jump-cuts to either direction to elude blockers in tight quarters. Corners like a street bike, scraping the edge and showing excellent closing speed to rip down ball carriers from behind near the line of scrimmage. Aggressive tackler with great range thanks to length and hand-eye coordination. In 2019, incorporated more rips, spins and counters to complement his speed rush.

Taylor is a better athlete than football player at this point. Just average snap anticipation, too often timing it incorrectly and failing to effectively use his best attribute — speed. Too many wasted snaps where he’s beaten before the play really begins. Played multiple roles at Tennessee and too often looked confused in his assignment, reacting slowly rather than trusting his keys and attacking.  Tentative play is only exacerbated by his ‘tweener frame. Lacks the sand in his pants to hold up effectively in run support.

Dee Ford, San Francisco 49ers — Like the 6-2, 250-pound Ford, Taylor possesses the burst and bend to project as a difference-making edge rusher despite below-average bulk and an inconsistent college career. He must become more consistent as a rusher to overcome his struggles against the run.