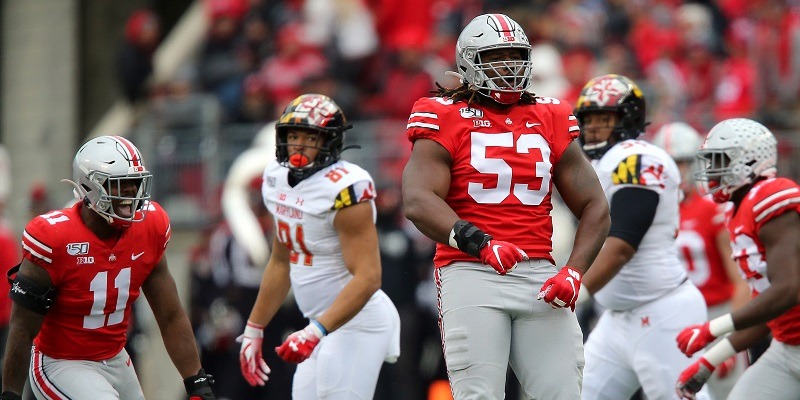 A fifth-year senior, Hamilton saved his best for last, with 28 tackles (10.5 for loss) and six sacks in 2019 for Ohio State, which reached the College Football Playoff semifinals. Had 21 career tackles for loss.

Hamilton showed off his strength and disruptive abilities at the Senior Bowl, then led all defensive linemen in the bench press (33 reps) at the NFL Scouting Combine.

Hamilton improved his game a decent amount from his junior season to his senior season. Decent body type for the pros. High-effort tackler who is willing to launch himself at the target to make contact. Takes smart paths to the ball and won’t get lost in the shuffle of a crowded line. Hustle player who can find late success by never letting his foot off of the gas. Solid lateral agility for a guy his size, and it will allow him to run stunts. Consistent level of energy throughout the game regardless of the situation.

Hamilton has a hard time recovering once his balance is tipped. Can’t lock back into place against aggressive run blockers. Anchor is more likely to be exposed when the competition level increases. Average physical tools won’t allow him to slack off from a technical standpoint. Rotational player at Ohio State. Benefited a lot from a production standpoint because of Chase Young’s impact. Unable to counter off his initial move to any degree of success. Pure 3-technique without the versatility to slide around the line.

Davon Godchaux, Miami Dolphins — Hamilton doesn’t have an impressive athletic profile and will never wow with splash plays or turn into a star on the defensive line. Like Godchaux, he’s a 3-tech with a modest anchor but wins with effort and awareness. Hamilton is likely to start his career as a rotational defensive tackle, although he could blossom into a solid starter.