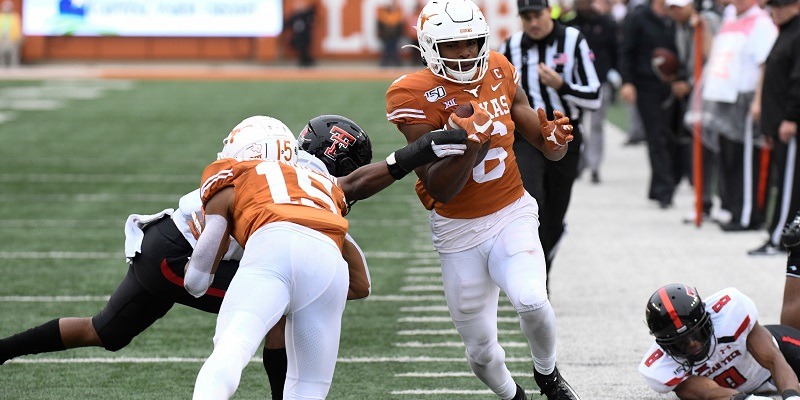 A 100-meter Texas state champion in high school, Duvernay was quiet early on at Texas before erupting as a senior, when he caught 106 passes for 1,386 yards and nine touchdowns. All three totals exceeded his numbers through his first three seasons.

Duvernay impressed with a strong performance at the Senior Bowl, then blazed a 4.39-second 40-yard dash at the NFL Scouting Combine, tying for the fifth-fastest among wideouts.

Duvernay can regularly take the top off defenses with his long speed, with home-run-hitting ability on every play. Kick-returner experience is apparent, as he allows blockers to set up before pressing the gas. Duvernay tries to finish his runs tough, even if the results are mixed. Ball tracking has some great moments, especially when he can hunt it down on deep throws. Active blocker who occasionally flashes a nasty side.

Duvernay struggles to find separation in the intermediate areas of the field, particularly in traffic. Despite speed, more of a straight-line athlete who loses speed when trying to make cuts. May be limited to the slot in the NFL. Can’t restart his momentum smoothly after slowing it down. Smaller catch radius and a passive approach to playing the ball leads to incompletions. Disappears in the red zone.

Antwan Goodley, free agent — Goodley may seem like a low comparison for Duvernay, but it’s tough to find many stylistic comparisons. Duvernay’s blazing speed is often overshadowed by the limited route tree and disappearance in traffic, although he is a lot more reliable with his hands than Goodley was coming out of Baylor.