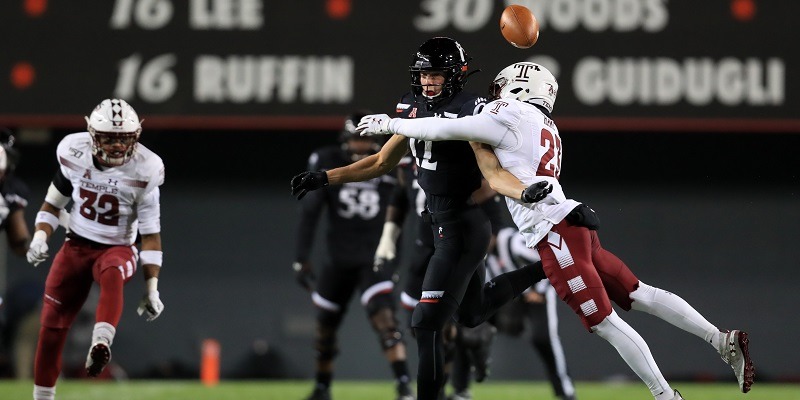 A New Jersey native, Hand was ready to go to Temple but opted to follow then-Owls head coach Matt Rhule to Baylor. Hand started nine games in 2017 before being limited to just five starts because of injuries in 2018. Admitting that Waco was a culture shock, he followed his position coach and longtime mentor Fran Brown back to the East Coast for 2019, granted a hardship waiver for immediate eligibility. He set career highs in tackles (43), assisted tackles (16) and interceptions (three).

Hand’s 40-yard dash (4.52 seconds) at the NFL Scouting Combine was merely solid, but he showed outstanding explosion in the jumps, tying for the top mark among cornerbacks in the vertical (41 inches) and second in the broad (133 inches).

Hand looks and plays bigger than his listed size, sporting a broad-shouldered, well-built frame and setting the tone with a highly physical brand of football that could lead some to project him at safety. Of course, given his stellar workout, that seems unlikely to happen. Once established at Baylor, he was rarely challenged on deep throws, as opponents left him largely alone. He was asked to line up close in press, as well as off and in zone coverage, where he appeared most comfortable. Is among the fiercest hitters at his position in the draft.

Hand does not appear to possess the same speed on the field that he showed during testing, despite the fact that he does play fast due to his awareness and confidence. Not always able to make up ground with the ball in the air. Seems more interested in physically intimidating receivers with his hits than attempting to steal the ball, making four career interceptions.

Eric Rowe, Miami Dolphins — Possessing a similar burly frame and game as the 6-1, 205-pound Rowe, Hand could also wind up as a “surprise” Day 2 selection. Like Rowe, some likely will see Hand at cornerback with others projecting him to safety (where Rowe moved in 2019 with Miami).