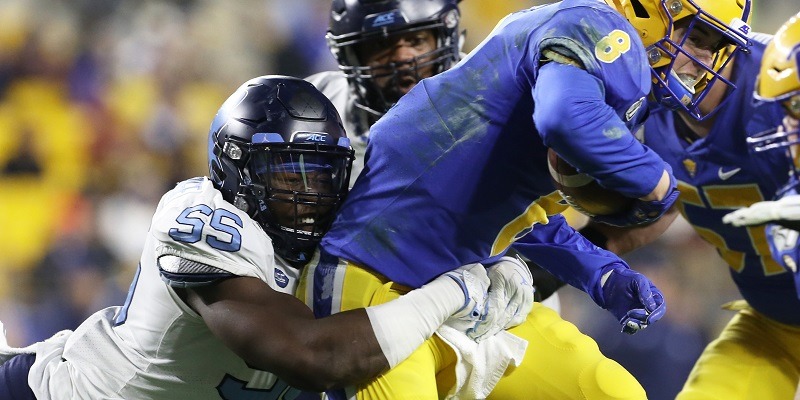 With an in-season switch to edge rusher as a senior, Strowbridge lost weight — 18 pounds from his listed 285 by North Carolina — when he checked in at the Senior Bowl, where he shined to amplify projections as a defensive end at the next level. Either way, he’s a versatile piece with intriguing upside after a senior season in which he made a career-high 45 tackles (6.5 for loss) and three sacks.

Strowbridge’s workout at the NFL Scouting Combine was mostly average, though he showed nice quickness in the short shuttle (4.37 seconds).

Stowbridge plays a lot lower than his listed height would indicate. Flashes of hand activity and speed are exciting, but it’s not consistent. Size and strength make it difficult for runners to escape once they’re in his grasp. Stays focused on the run and works hard to break off blocks when it arrives. Looked more explosive and aggressive at a lower weight. Surprised with his ability to dip and turn the corner when playing on the edge at the Senior Bowl.

Stowbridge some tweener traits and is unlikely to make any major adjustments to his frame as a pro. Too small to put up a fight when targeted by double teams. Play speed fluctuates from snap to snap. Lacks control with his block-shedding attempts. Tries to bludgeon blockers with his hands instead of being precise. Loses a lot of his stamina and energy later on in games. Average at best in pursuit situations. Great motor but has to consistently show first-step burst and bend off the edge. Sawed-off arms get him into a ton of trouble when taking on longer blockers.

Kentavius Street, San Francisco 49ers — Street’s career has been dragged down by injuries, but his flashes of power made him an interesting move piece at North Carolina State. Strowbridge doesn’t have the same bang in his hands that Street possesses, but he fits a similar mold from a scheme standpoint, and might fit best on the edge.