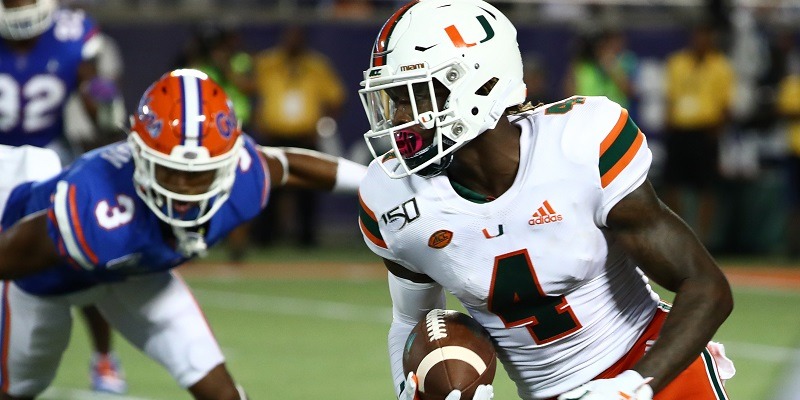 A former four-star recruit from East St. Louis, Ill., Thomas went on to total 83 career catches for 1,316 yards and eight touchdowns across three seasons for the Hurricanes. He also added 54 kick returns for 1,219 yards and 14 punt returns for 265 yards (18.9 average) and a score.

As expected, the undersized Thomas ran well at the NFL Scouting Combine, posting a 40-yard dash of 4.45 seconds.

Thomas is among the most explosive athletes in the draft. Don’t let his listed size fool you — he possesses a compact, rocked-up frame with the body armor to be more than a spindly vertical threat. Lightning off the snap, Thomas is a difficult matchup for corners who want to try to press him, showing beautiful coordination between his hands and feet to quickly slip by jams. Easy acceleration to top speed, providing an immediate field-stretching presence. Dynamic after the catch, as well on jet sweeps and returns.

Thomas does too much freelancing as a route-runner and has too many concentration drops when trying to make a move before securing the ball. Plays bigger than his size suggests but offers a relatively puny catch radius. Requires a thorough vetting of his character. Had multiple clashes with former Miami head coach Mark Richt and his staff, and then was suspended two games in 2019 for another “undisclosed violation of team rules.” Tools didn’t translate to great production, though poor quarterback play was a factor.

Antonio Callaway, Tampa Bay Vipers (XFL) — Thomas is one of the boom-or-bust picks of the draft, not unlike Callaway, the No. 105 pick in 2018. An extraordinary athlete, Thomas managed just eight touchdown receptions in three seasons. His own inconsistencies, of course, were partly to blame for this, but the raw talent is undeniable.