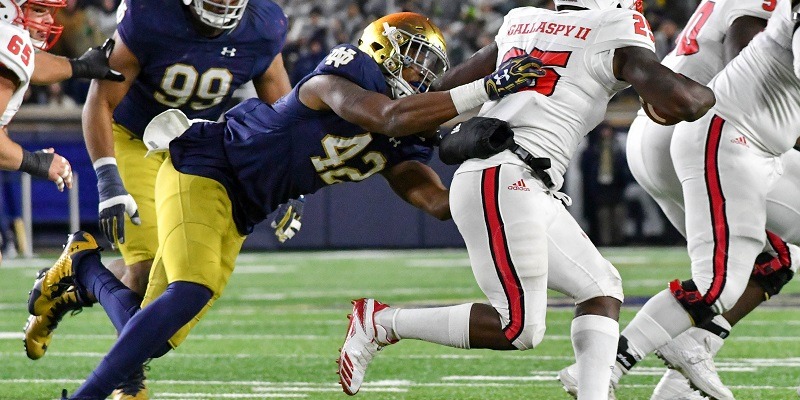 A 2019 team captain and two-year starter for the Fighting Irish, Okwara recorded 12.0 sacks the past two seasons and is a rising talent. The Nigerian-born Okwara moved to the U.S. as a third-grader and was a top 300 recruit out of high school. One of nine true freshmen to play at least eight games for Notre Dame in 2016, he was a rotational sub-package player until his junior season. Okwara had 8.0 sacks as a junior, before a broken leg disrupted his 2019 campaign.

The injury kept Okwara from participating at the Senior Bowl or doing much at the NFL Scouting Combine, though he did post an impressive 27 bench-press reps.

Okwara looks the part of an NFL edge rusher, with a broad-shouldered, long-armed, tapered frame and good overall weight distribution. Effective rushing off either side, timing the snap well and showing steady acceleration and intriguing core flexibility to wrap the corner. Uses long arms effectively to get a quick initial punch and free himself to locate the ball. Excellent hand-eye coordination to knock the ball out of the quarterback’s hand (four forced fumbles at Notre Dame). Developing pass rush technique, incorporating better hand placement and grip strength in 2019 to complement his speed rush. An effective bull rusher and run anchor when he keeps his pads low and knees bent. Good lateral agility to shuffle and extend the run wide. Coordinated athlete who does not look out of place when asked to drop into coverage. Good bloodlines. Brother, Romeo, plays defensive end for the Detroit Lions after also starring at Notre Dame. Voted a team captain in 2019.

Okwara is too reliant on his length and athleticism at this time. Plays a finesse style which won’t fit with every club, winning with quickness and agility but too often getting rag-dolled once blockers latch on. Did not start playing football until high school, and it shows in his lack of awareness and nastiness. Fails to take full advantage of his length and athleticism when unable to get to the quarterback, breaking up just one pass over his college career. Too easily fooled by misdirection and cut blocks. Too easily tossed to the ground. Requires medical check after fracturing his left fibula Nov. 10 vs. Duke, missing the final four games of his senior season.

Samson Ebukam, Los Angeles Rams — The 6-3, 245 pound Ebukam did not generate nearly as much hype out of Eastern Washington University as Okwara did at Notre Dame, but they offer similar traits as pass rushers. If Okwara dedicates himself to the game the way that Ebukam (selected No. 125 overall back in 2017) has, he could prove even more disruptive at the next level than he was in college.