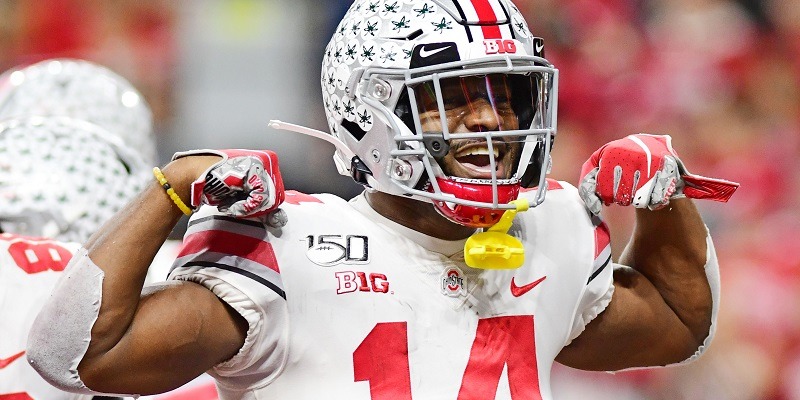 Hill caught 198 passes for 2,303 yards and 20 touchdowns across 50 career games at Ohio State. He caught a career-high 10 touchdowns as a fifth-year senior in 2019 and then shined at the Senior Bowl, being voted the North squad practice player of the week at wide receiver after showing top-notch route running.

Despite running clean routes at the NFL Scouting Combine, Hill disappointed in the 40-yard dash (4.60 seconds) and the vertical (32 1/2 inches) and broad (114 inches) jumps.

While slightly shorter than scouts would prefer, Hill is far from small, boasting a broad-shouldered frame and rocked-up arms. Lightning quick off the snap, accelerating smoothly for the first 10 yards. Quality route-runner, snapping into his breaks to create separation and deftly deking defenders to get easy clearance on combo routes. Strong, secure hands with one-handed, highlight-reel grabs on tape (Minnesota). Quality punt returner; shows plus ball skills, vision and burst to be a big-play threat.

Hill may be viewed by some as “just” a slot receiver due to his average height and disappointing timed speed. Appears quicker than fast, accelerating off the line in a flash but topping out quickly. Could do a better job of working to find the soft spots as his quarterback buys time. A bit lackadaisical in running out his routes when runs are called, tipping off defenders to the action.

Randall Cobb, Dallas Cowboys — Like the 5-10, 195-pound Cobb, Hill is lightning in a bottle, with the strong hands and flair for the dramatic to earn Day 2 consideration in the draft and possible future Pro Bowl invitations if he lands in the right spot.