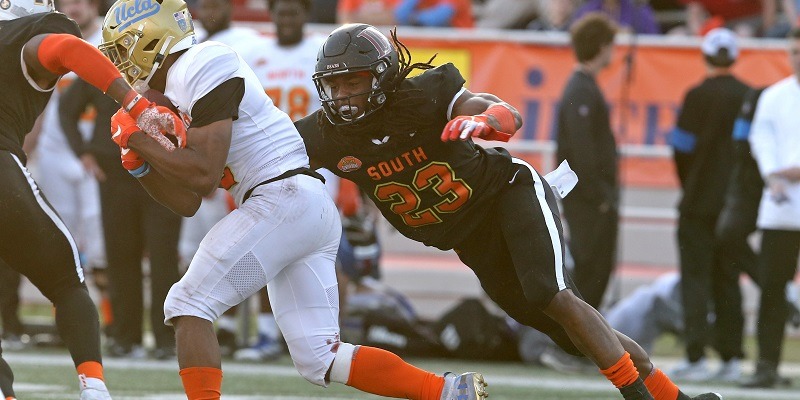 A credit to Dugger’s impact was evident in 2019, when he played in only seven games due to injury but claimed the Cliff Harris Award, given to the top defensive player in Division II. He was also a first-team All-American and returned two punts for touchdowns along with a pick-six. Dugger did fight injuries, playing just 42 career games in parts of five seasons. He had seven career return TDs.

After impressing with his size and athleticism at the Senior Bowl, Dugger continued his rise with a phenomenal workout at the NFL Scouting Combine. His vertical leap (42 inches) led all safeties, while his broad jump (134 inches) ranked second and his 40-yard dash (4.49 seconds) sixth.

A physical prototype for the NFL, Dugger could have played in the SEC, with a sculpted musculature and natural athleticism. Shows impressive awareness and positional versatility. Has the physical talent, demonstrating good route anticipation and range as a single-high safety, quickness and length to swallow receivers in one-on-ones and providing steady, heavy hits in run support. Has speed to handle NFL receivers, accelerating quickly with short, choppy steps that open up to a second gear. Long arms to expand tackle net, and shows good hand-eye coordination to lasso the feet of ball carriers. Lives up to his imposing size when he has a runway, delivering teeth-rattling hits. Good hands (seven career interceptions) and is a natural with the ball in his hands, showing vision, elusiveness and speed in the open field. Blew the doors off the combine, even amid high expectations.

A man amongst boys at his level (turns 24 before training camp), Dugger was bigger, faster and more physical than D-II opponents. Will face a steep change in competition. Plays aggressively and sometimes pays for it, lunging to break up passes or to make the tackle only to come up slightly short. Requires a close look by team doctors after missing five games in 2019 due to a hand injury and all of 2016 with an undisclosed injury, which forced a second redshirt in three years.

Kevin Byard, Tennessee Titans — Dugger is bigger and plays faster than the Titans’ Pro Bowler, but they share natural playmaking ability and paths to the NFL, with Byard proving a diamond in the rough at Middle Tennessee State. Dugger’s ceiling is extremely high.