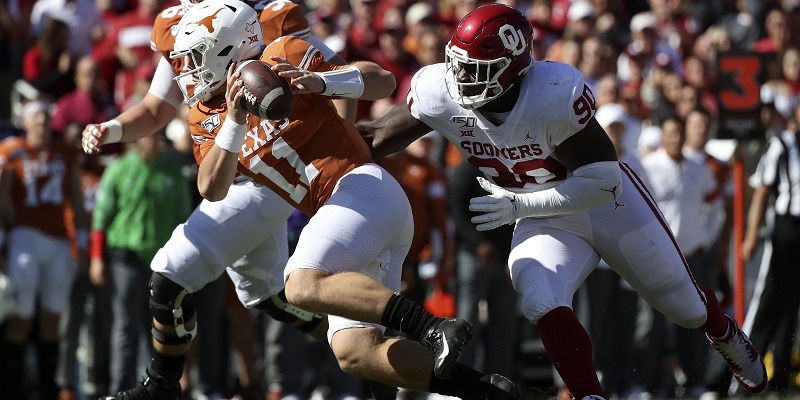 From Ottawa, Gallimore was well on the radar as a recruit, becoming the first Canadian to be selected for the U.S. Army All-American Bowl. He finished his Oklahoma career with 148 tackles, including 18 for loss and nine sacks, with five forced fumbles. He was first-team All-Big 12 as a senior.

Gallimore had a strong week at the Senior Bowl and then blazed a 4.79-second 40-yard dash at 304 pounds at the NFL Scouting Combine. It was the second-fastest time of any D-lineman over 265 pounds this year.

A three-down player, Gallimore is bull strong — reported offseason bench press of 500 pounds and squat of 800 — and is one of the most gifted pure athletes at the defensive tackle position in the past decade. More than capable of playing at a higher weight class, as he weighed nearly 330 pounds when playing more nose tackle. Able to work up and down the line without missing a beat. Capable of matching up against double teams and eating them up. Active and angry hands never give blockers room to breathe. Balance is rare for a big man. Special straight-line mover who can run down plays from behind. Tough and willing to scrap. Dislodges lighter blockers with the natural pop in his hands. Pocket collapser who can send offensive tackles into their quarterback’s lap. Can win a variety of moves, such as rips, swims, and spins. Hustles to get back into the play. Redirects run plays at a high level.

Gallimore fails to maximize his arm length when rushing the passer. Doesn’t put his counters together fluidly yet and can improve his hand placement. Must learn to finish tackles while still engaged with blockers. Has a high floor with no glaring limitations, although the opportunity for refinement exists for Gallimore to unlock his full potential.

Quinnen Williams, New York Jets — Godzilla wasn’t available for the player comparison, so Williams is the choice. One of the few concerns with Williams coming out was his lack of refinement tying his pass-rush moves together. Gallimore shares that same issue, and it’s one of the few negatives he has overall. The overall package of traits is truly rare for a defensive lineman, though, if he can find consistency.