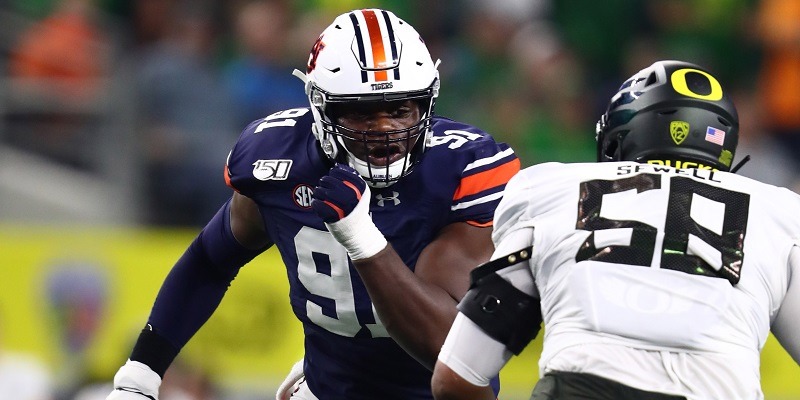 Coe’s numbers didn’t jump off the chart as a junior (15 tackles, three for loss) on an all-star Auburn line, but his position flexibility intrigues. He did finish with 21 tackles for loss and nine sacks — including 13.5 TFLs and seven sacks in 2018 — among his 71 career stops.

Despite weighing 280 pounds, Coe worked out with the linebackers at the NFL Scouting Combine. His 40-time (4.89 seconds) accordingly looked slow, but it would rank sixth among D-linemen of 280-plus pounds.

Coe has experience operating from a two-point stance, and should be able to move around the defensive line. Occasional displays of power are worth getting excited over. Able to take simplistic coverage roles when needed. Straight-line speed has some good highlights when he gets to chase after the play. Two-time state high school wrestling champion. Intriguing body type has room to adjust relative to what his team wants.

Disappointing length (33 3/4-inch arms) will give Coe issues against most offensive tackles. Unexciting hands don’t give much in the way of counters. Plays below his expected weight class. Questionable balance gets exposed when he is forced to match up against physical offensive linemen. Leverage is a major issue, and it gets compromised quite regularly. Lacks the bend to be an effective edge tilter. Doesn’t have a true home from a positional standpoint and might end up without a defined spot in the pros. Drag down tackler who doesn’t land with a ton of power. Shorter arms make it tough to get clean tackles.

Isaac Rochell, Los Angeles Chargers — Coe will need to improve his anchor and technique, but the tools are present to do just that. Rochell was a similarly position-less player coming out of Notre Dame, but has found a home in the Chargers rotation over the past few years. Coe will likely follow a similar path on his way into the league.