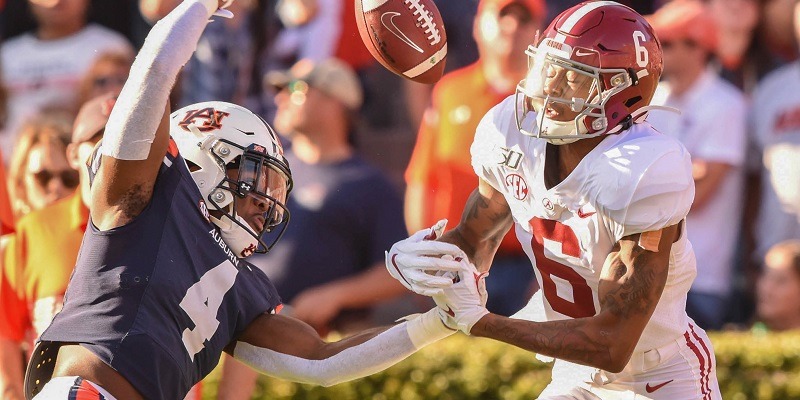 The son of two former Nigerian Olympians, Igbinoghene signed with Auburn as a four-star wide receiver in 2017. He was asked in 2018 to switch to cornerback as an experiment, which ended up paying huge dividends, as Igbinoghene started the next 25 games at the position. He finished with 92 tackles, one interception and 19 passes defensed, in addition to standout work as a kick returner, bringing back two for scores.

Compact and competitive, Igbinoghene has springs for feet and swivel hips. An exciting talent who appears to be just scratching the surface of his potential. He is at his best in the face of receivers in press-man coverage, challenging opponents to beat him off the snap. Igbinoghene has such bounce in his legs that he rarely bothers extending an arm to jam receivers (and potentially leave himself off-balance), simply backpedaling for a step or two before fluidly turning his body and attaching himself at the hip to his opponent. He offers some positional versatility, seeing plenty of time inside at nickel.

Igbinoghene has a short, stubby frame (5-10, 31 3/4-inch arms) that may not meet the requisites for some teams and will leave him severely overmatched against some of the monster-sized wideouts in the NFL. An elite athlete who may have never switched to cornerback had he shown more consistently reliable hands. Has major issues finding and playing the ball in the air. Was protected by one of the fiercest defensive lines in all of college football (not to mention hard-hitting safeties over the top), and therefore played with the confidence that quarterbacks rarely would have the time to attack deep.

Chidobe Awuzie, Dallas Cowboys — Much more similar in stature, agility and physicality than just their Nigerian roots, Igbinoghene projects as a future NFL starter, just as Awzuie has become for the Cowboys since being selected 60th overall in 2017. Like Awuzie, Igbinoghene’s frame and grit could mean he’s best inside at nickel.