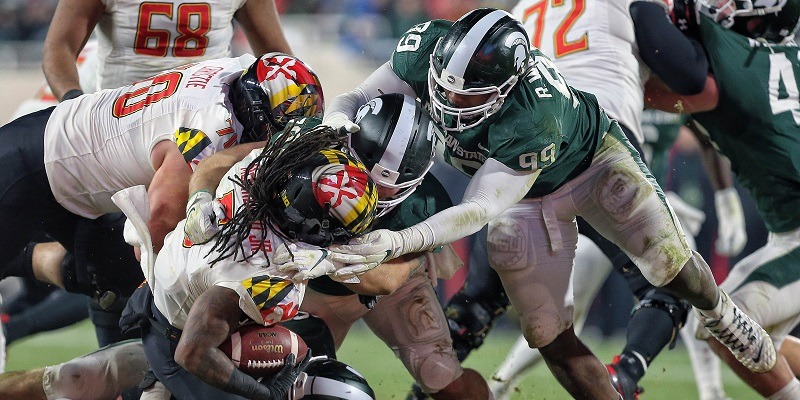 A Spartans stalwart, Williams’ 42 consecutive starts at nose tackle were the longest streak for a position player since Mark Dantonio took over as coach in 2007. The two-time first-team All-Big Ten selection by The Associated Press finished his career with 160 tackles (20 for loss) and 11.5 sacks in 50 games.

Williams drew ample praise for his work at the Shrine Bowl, but he did not have a great workout at the NFL Scouting Combine, with his bench press (17 reps) and vertical leap (25 1/2 inches) tying for worst among defensive linemen and his broad jump (101 inches) ranking second worst.

Williams keeps his pads low throughout plays and refuses to give away leverage. Connection between his top and bottom halves creates good body control. Arms are long enough to interrupt passing lanes and force quarterbacks to make adjustments as the ball comes out. Should fit nicely for a defense as a two-gap defender once he irons out the flaws as a run defender. Tackle radius is enough to redirect runners around his area. Fast enough to catch quarterbacks when he breaks through the line.

Williams lacks the mass to stand up against double teams and is still learning how to implement his length. Average power in his hands makes it harder to discard blockers as the ball arrives. Predictable pass-rusher who doesn’t bring anything dynamic to the table. Hand usage lacks polish. Slow-burn rusher who doesn’t find penetration very often. Unable to flow laterally down the line of scrimmage effectively. Average athleticism overall.

Dalvin Tomlinson, New York Giants — A run defender with the body type to adjust relative to what teams want, Williams could be viewed similar to how Tomlinson was when he came out of Alabama a few years ago. Tomlinson has blossomed into a starter over the past few years, and Williams could make the same easy transition. His lack of pass-rushing potential limits the ceiling, but he’ll be worth the asking price for a team that gets a two-contract starter.