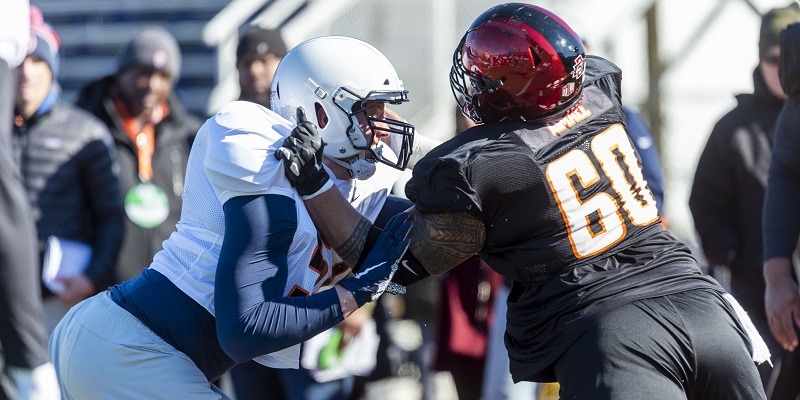 A four-year starter after a redshirt season in 2015, Hunt brings varied experience across the offensive line, playing both guard and tackle. He was also a high school basketball player who averaged 18 and 11 in a standout prep career in Texas.

Hunt did not work out at the NFL Scouting Combine, after he missed the end of the season with a groin injury.

Hunt passes the eyeball test with the frame of an NFL blocker — broad-shouldered, well-proportioned frame and thick, long limbs. Hoops background evident in his ease of movement. Smooth off the snap, showing good initial quickness and lateral agility to mirror. Bends knees to keep pads low enough to win the leverage battle. Versatile. Started the past two seasons (2018-19) at right tackle (28 games) but began his career at left guard (22 starts there in 2016-17). Started two games at left tackle as a redshirt sophomore. Level of competition questions are fair, but Hunt comes from a pro-style offense and lined up in a three-point stance. Asked to fire off the ball, potentially easing his transition to the NFL. Can bully with size and strength, showing enough leg drive to generate movement at the point of attack. Highly durable and competitive.

Hunt is not yet the sum of his parts. Relies on his size and athleticism to wall off opponents rather than dominating them. Could be golden with NFL coaching and technique work, specifically better torque and counters. His punch is more of a jab, lacking the power to knock opponents back. He fails to lock on and control and has erratic hand placement, hitting defenders too high and allowing them to slip free. Foot speed for tackle must be proven at the NFL level and is less valuable — in terms of draft capital — as a guard.

Brandon Brooks, Philadelphia Eagles — Hunt is an intriguing developmental prospect with a legitimate NFL starter tool kit in terms of size, athleticism and positional versatility. It likely will take him a year (or two) to acclimate, but if he gets stronger and plays with a mean streak, the sky is the limit.