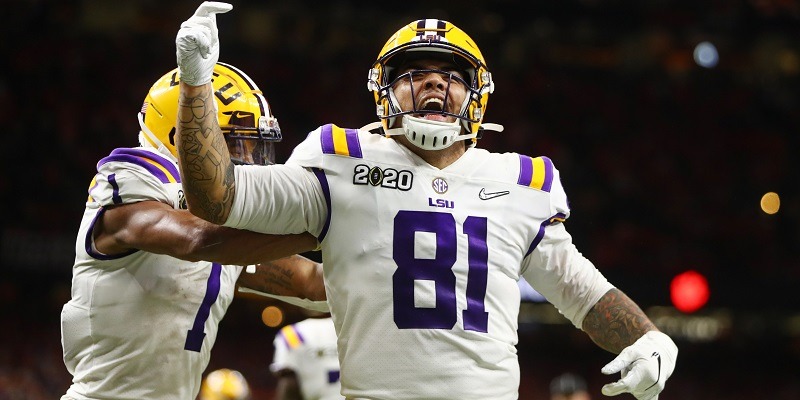 The son of Hall of Fame NFL wide receiver Randy Moss answered a lot of questions last season as a junior, setting LSU single-season marks for a tight end with 42 receptions and 534 receiving yards as part of a record-setting offense. Before that, he had six catches in three seasons — all at North Carolina State as a freshman before sitting out 2017 as a transfer and missing 2018 because of a foot injury.

Moss was unable to work out at the NFL Scouting Combine after a physical found that he had a Jones fracture in his foot, requiring surgery.

Moss has the soft hands and competitiveness of his dad but sports a completely different frame and game than his tall, lanky father, with a compact, well-distributed musculature. Wins with quickness and toughness rather than straight-line speed. Good body control to slip through traffic at the line of scrimmage when jammed. Used on a variety of routes in LSU’s scheme and shows attention to detail in setting up defenders, varying his gait and generating burst out of his breaks. Physical, almost combative player who isn’t afraid of the street fights as a blocker, playing bigger than his size.

Moss benefited from being a complementary threat on an offense loaded with NFL talent. Possesses just average size and below-average length for the position and, while athletic, is not special in this regard, lacking sudden acceleration off the line (even when split out wide). Needs to do a better job of keeping both hands wrapped securely around the football, including when leaping over defenders, putting the ball on the turf against Alabama and Mississippi in 2019 in this way. Still has a long way to go as a blocker, and his frame might always limit him in this area.

Jordan Reed, Washington Redskins — When healthy, the 6-3, 242-pound Reed has been a difference-maker in Washington, catching 24 touchdowns in six seasons. Moss’ size, soft hands, savvy route-running and knack for playing well in big games (three TDs in this year’s playoff games, including two in the national title game) could earn him a top 100 selection, just as Reed received (No. 85 overall) in 2013.