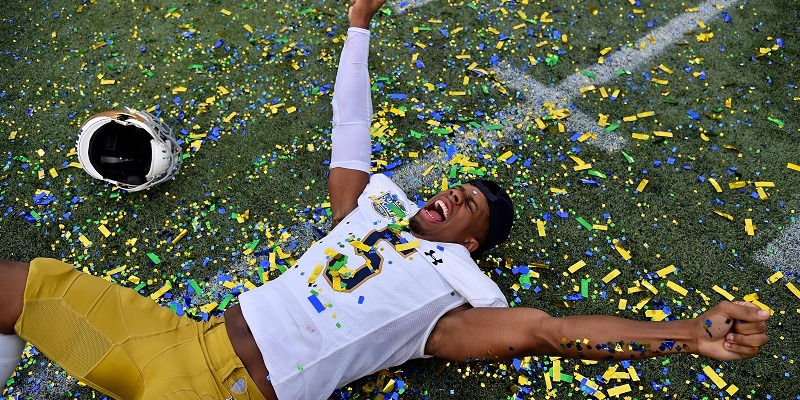 Pride’s best season at Notre Dame came in 2018, with 47 tackles, two interceptions and 10 pass breakups, before he added 40 tackles, one pick and six PBUs as a senior. He also ran track for the Irish, posting a time of 10.5 seconds for 100 meters at the 2018 ACC championship.

Pride was mostly very sharp at the Senior Bowl before tailing off some late in the week. While he didn’t jump well at the NFL Scouting Combine, he showed outstanding movement traits, running the fourth-fastest 40-yard dash (4.40) among cornerbacks and tying for the fourth-fastest 3-cone drill (6.94).

Pride is clearly athletic enough to stick to his opponents in man coverage. Looked phenomenal at the Senior Bowl with his ability to stay in the play while trailing receivers. Intelligent and patient with his footwork. Not the strongest guy but knows when to bring his hands into the mix. Quick to process plays. Able to work with some cushion and still stay in sync with receivers. Accurate and consistent tackler. Not a strider, but he can cover a good amount of ground in a straight line.

Pride doesn’t always move quite as smoothly as you’d expect, given his athletic profile. Not as effective when working zone coverage and having to transition repeatedly. Undersized guy (5-11, 193) who might be relegated to playing inside as a pro. Size does lead to some slipped tackles, but it’s not due to a lack of effort. Poor ball tracker. Has trouble getting a piece of the action against larger opponents.

Devin McCourty, New England Patriots — McCourty’s eventual conversion to safety might not match up with Pride’s skill set, but the similar athletic profile and fluidity make them comparable players coming out of college. Pride should be an early starter, assuming he goes to a cornerback-needy team. It wouldn’t be a surprise to see him make the Pro Bowl after a few years of honing his game.