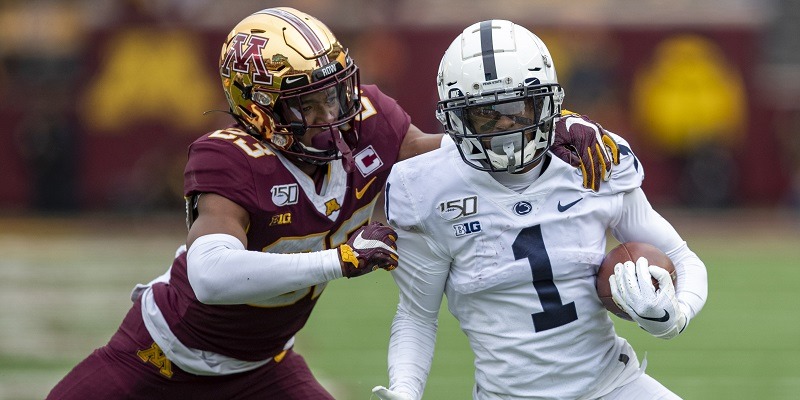 After redshirting in 2017, Hamler broke Saquon Barkley’s school freshman record with 1,417 all-purpose yards. Hamler then posted 1,586 all-purpose yards in 2019, with 56 catches for 904 yards and eight TDs as a hold-your-breath, big-play weapon.

Though expected to run a blazing time, Hamler wasn’t able to work out at the NFL Scouting Combine after tweaking his hamstring during training.

Hamler is a fantastic athlete who is both ultra-quick and fast. He’s electric in space, showing the burst and acceleration to get in and out of breaks as well as the long speed to threaten vertically. Those tools especially shine after the catch, where he repeatedly turns short catches into long gains. He also has extensive experience as a returner. Hamler knows how to weaponize his suddenness as a route-runner, and his quickness has proven useful against press coverage, which he’ll see more of in the NFL.

Hamler’s size obviously presents some limitations, and he struggles when trying to make plays in traffic or with a defender contesting the catch. His hands are shaky at times, with plenty of body catches and some bobbles, along with a handful of drops. Likewise, his catch radius is small, requiring a precise quarterback. Some teams might see him purely as a slot receiver, a position that requires more nuance and positioning.

John Brown, Buffalo Bills — Mecole Hardman would also be a fair comparison, but Brown might be the best model for Hamler. Both are weapons with their speed and quickness, though their size means plenty of work in the slot. Hamler’s goal should be to develop the way Brown has over the last few years.