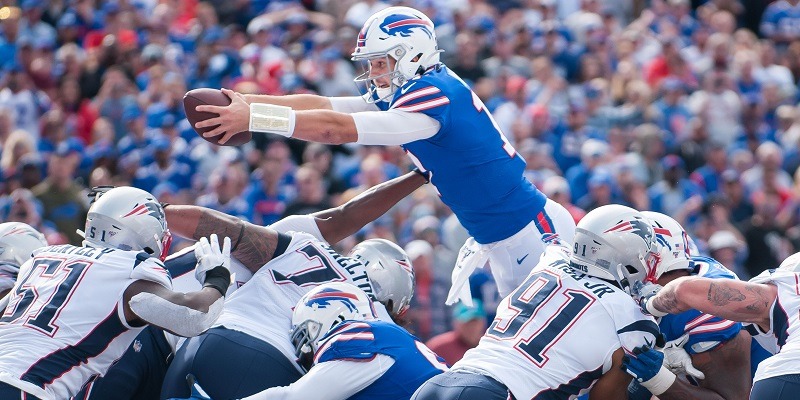 2019 summary: New weapons and a rebuilt offensive line helped Josh Allen take another step, while Sean McDermott’s stingy defense carried the load. The Bills pushed the Patriots in the AFC East before settling for a wild-card spot and falling victim to Deshaun Watson’s heroics in Houston.

Cause for concern: While Allen has come a long way, he remains unpolished, with shaky accuracy (especially deep) and bouts of inexplicable decision-making. His mobility is still valuable, but with Diggs on board, Allen has no excuses to remain a below-average passer.

Worth watching: There are more carries and a much larger role in store for Devin Singletary but how the split works with Moss is undetermined. It’s likely a week-to-week scenario in which the Bills will ride the hot hand.

With a very well-rounded roster, great coaching and the rival Patriots now weakened, the Bills are a relatively safe bet to contend for a playoff spot. Reaching double-digit wins will depend on health and Allen’s development, but we like their chances.

2020 forecast: Buffalo’s defense should keep humming and could become a juggernaut if Ed Oliver takes a leap. Even if Allen’s progress stalls, offensive coordinator Brian Daboll is terrific at manufacturing big plays, and the Diggs addition gives him one of the league’s best set of weapons. The Bills are the slight favorites in the division, but they’ll need more from Allen to threaten Kansas City and Baltimore.

2019 summary: A historically great defense — led by Defensive Player of the Year Stephon Gilmore and a shutdown secondary — had Patriots fans eyeing another 16-0 regular season, but the offense never clicked and came up short in a home playoff loss to Tennessee, Tom Brady’s final game as a Patriot.

Cause for concern: Newton’s health appears to be a non-factor, but the rash of opt-outs due to COVID-19 caused a bunch of unexpected turnover on the depth chart. Some even added uncertainty at weak positions, with Hightower now gone from an already depleted linebacking corps and LaCosse’s departure leaving no veterans of note at tight end.

Worth watching: No position was more in flux this summer than linebacker. Belichick loves do-it-all linebackers and safeties to run his simulated pressures, but with Hightower, Collins, Van Noy, Roberts and even Chung gone, the Patriots need several youngsters to emerge. Ja’Whuan Bentley (inside) and Chase Winovich (outside) will play major roles, but Uche and Jennings must adapt quickly. Dugger, a big, physical safety, will battle veteran Adrian Phillips for early playing time.

Opt-outs aside, a healthy Cam Newton would likely make the Patriots at least co-favorites in the AFC East, but betting on his health is dicey. Still, faith in Bill Belichick makes the over tempting, although it might be better to avoid this one altogether.

2020 forecast: Belichick and Josh McDaniels adapt as well as anyone, which is why AFC East opponents should be scared if Newton is healthy. Belichick should find enough bodies to keep the defense sharp, but personnel losses and likely turnover regression make the margin for error slim. A wide range of outcomes — from 12-4 and Super Bowl contenders to 6-10 if Jarrett Stidham plays — are on the table.

2019 summary: Derailed early by Sam Darnold’s bout with mono, the Jets cobbled together a surprising 6-2 stretch to close the season. While it came against a weak schedule, that run — and Darnold’s strong play — created optimism for 2020.

Cause for concern: GM Joe Douglas has done a lot of work, but is there enough talent to continue 2019’s second-half surge? The overhauled offensive line will need growth and chemistry, and Darnold still lacks great weapons. The defense lost its two best players in Adams (trade) and Mosely (opt-out), putting more pressure on coordinator Gregg Williams.

Worth watching: Douglas added two viable options at tackle in Becton and Fant, but neither is a sure thing. Becton will likely slot in at left tackle, leaving Fant to battle 2019 third-rounder Chuma Edoga, who struggled as a rookie but has excellent tools. Fant has never been a regular starter but was paid like one.

The Jets beat this total last year despite Darnold missing three games, so it’s fair to expect better, especially with Darnold adding experience and the Patriots now weakened. Even so, Adams’ trade and Mosely’s opt-out would make us a bit cautious.

2020 forecast: After a bizarre sophomore campaign, Darnold must show progress in 2020, but it’s not all on him. The quantity-over-quality approach on the offensive line might not fix things immediately, especially if Becton transitions slowly. Add in a defense that lost Adams and Mosely, and it’s hard to see the Jets as a serious contender to claim the division.

2019 summary: Historically awful for the first half of the season, the Dolphins certainly didn’t quit, riding veteran Ryan Fitzpatrick to five one-possession victories down the stretch, including spoiling the Patriots’ bid for a playoff bye.

Cause for concern: Jackson, Flowers, Karras and Hunt provide options along the offensive line, but will it be enough? Jackson has far more potential than polish for now, and Hunt’s transition from the Sun Belt could be rocky. Flowers has all of one adequate season on his resume, and Karras’ only campaign as a starter was shaky. The stakes are high given Tagovailoa’s injury history.

Worth watching: Tagovailoa won’t be battling Fitzpatrick as much as the team’s plan to be patient with the lefty from Alabama. By all accounts, Tagovailoa is fully healed from hip surgery, but how slowly will the Dolphins bring him along? Fitzpatrick’s leash might be longer given the lack of a preseason.

After making so many upgrades, Miami probably hopes to leap near .500, but rebuilding rarely proves so linear. The Dolphins outperformed their point differential by a wide margin in 2019 and likely won’t be so fortunate in close games. We’d expect some bumps and bruises, even if Tagovailoa plays early.

2020 forecast: The Dolphins didn’t lose many players of note and made a host of key additions, including reinforcements in both trenches and a potential franchise quarterback. But much of the free agent spending felt like empty calories, and the draft class — while big — includes several players who need significant development. The goal should be progress and a smooth transition for Tagovailoa, with an eye on competing in 2021.