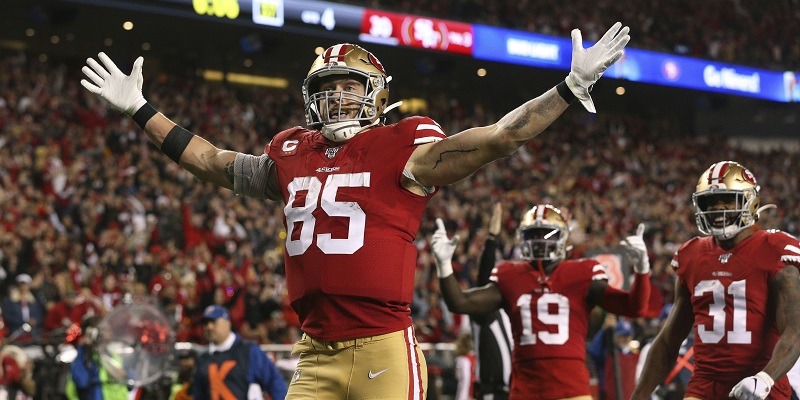 2019 summary: Kyle Shanahan’s offense took off, and the Niners’ defense was perhaps even more impressive, helping San Francisco go from 4-12 to 13-3 and the top seed in the NFC. But the defense couldn’t protect a 10-point lead in Super Bowl LIV, as the 49ers fell to the Chiefs.

Cause for concern: There are several options at wideout, but injuries came early and often as the 49ers geared up for gametime. Deebo Samuel’s foot injury created the most concern. He’s likely to miss several games, putting pressure on Aiyuk — a talented rookie who is a bit raw.

Worth watching: As great as the 49ers were last season, teams rarely improve by nine games in one season, and most who do take a step back a year later. Add in a loaded NFC West and it’s hard to take the over here, even if the Niners are division favorites.

2020 forecast: San Francisco lost some major talent, but they rebounded enough to remain among the NFC’s best teams. The standout defense is mostly intact, and Kinlaw — while not a great run defender — can help offset Buckner’s departure as a pass rusher. On offense, the line could be better with Williams’ arrival and improved health, and Jimmy Garoppolo will be two years removed from a torn ACL.

2019 summary: Russell Wilson’s heroics helped Seattle go a staggering 10-2 in one-possession games. That record was almost 11-1, as the Seahawks came up inches shy of the NFC West title against San Francisco. After one playoff win, they fell at Green Bay in the divisional round.

Cause for concern: Clowney chose a one-year deal with the Titans, and the Seahawks’ pass rush looks awfully thin. They managed just 28 sacks (T-29th in NFL) even with Clowney last year, and Irvin won’t solve things. Other veterans remain available, but Seattle might be counting on production from 2019 first-rounder L.J. Collier and the rookie Taylor, which is risky. That said, Pete Carroll and John Schneider have created more push with less on the depth chart.


Worth watching: Right guard is a position in flux as the Seahawks continue to build with scraps up front. At right guard, two maulers: 2019 fourth-rounder Phil Haynes, who didn’t play as a rookie, and 2020 third-rounder Lewis, who was a bully in the run game at LSU, are likely to both see the field early.

Sportsbooks factored Seattle’s unstainable 2019 record in close games, which makes sense — the Seahawks finished with a point differential of plus-7 despite going 11-5. Still, they’ve won 10-plus games in seven of Wilson’s eight seasons (they won nine in 2017). The over is a relatively safe bet.

2020 forecast: The 49ers likely won’t be juggernauts, but the Cardinals are on the rise and the Rams remain talented. Some regression seems inevitable for the Seahawks in such a talented division, but Wilson maintains their floor as contenders to win the West. The ceiling will be determined on defense, where a terrific back-seven will hope the pass rush holds up its end of the bargain.

2019 summary: Kliff Kingsbury and Kyler Murray took their lumps in their first NFL season, including a six-game skid in the middle of the season. But the offense certainly showed flashes, boosting expectations for Year 2, including some MVP buzz for Murray.

Noteworthy losses: RB David Johnson, OT Marcus Gilbert (opt out), DT Rodney Gunter, TE Charles Clay, DE Cassius Marsh, WR Damiere Byrd, DT Zach Kerr
Cause for concern: The Cardinals have gone from horrendous to adequate along the O-line, but questions remain. D.J. Humphries was overpaid on a new deal and has a lengthy injury history, and Gilbert’s opt out might force Jones to start right away at right tackle. Beachum was signed for insurance, but this could go poorly, especially with a QB in Murray who scrambles so often.

Worth watching: Simmons is far too talented to keep off the field, but where will he play? Arizona is starting him at linebacker, but it already has two expensive veterans there in Campbell and Jordan Hicks. Simmons could dabble on the edge but is better off in space, where he can chase and cover or blitz from distance.

Most signs point to improvement, as Murray could blossom with a full year under his belt and Hopkins on board. The question is how high the Cardinals can climb with two or three very good teams alongside them in the division.

2020 forecast: Hopkins’ arrival was massive. Not only will he become Murray’s go-to target, but he moves Larry Fitzgerald and Christian Kirk into complementary roles while allowing Kingsbury to use more 10 personnel if he desires. The offense could erupt, but will the defense hold up its end? With talent at all three levels, Vance Joseph’s unit could be the difference in nabbing a wild-card spot.

Cause for concern: Less than two years removed from their Super Bowl berth, the Rams’ roster has significant holes. A load of talent departed this spring, and rookies Akers, Jefferson and Lewis might be counted on immediately to step up. The linebacking corps is very thin, both inside and out, which could make new D-coordinator Brandon Staley’s transition bumpy.

Faith in Sean McVay and the Rams remains relatively high, but the decline to 9-7 last year was no fluke, and the talent level has slipped since. With two surefire contenders plus the rising Cardinals in the division, it’s not hard to imagine L.A. posting a losing season.

2020 forecast: The Rams’ fortunes will depend on whether McVay and Goff bounce back from an uneven season, but the infrastructure is critical. The O-line seems unlikely to return to its 2018 level. On defense, having the NFL’s best player in Aaron Donald sure helps, but there isn’t much pass-rush help around him. If things break right, the Rams could be contenders, but they could also wind up last in the division.