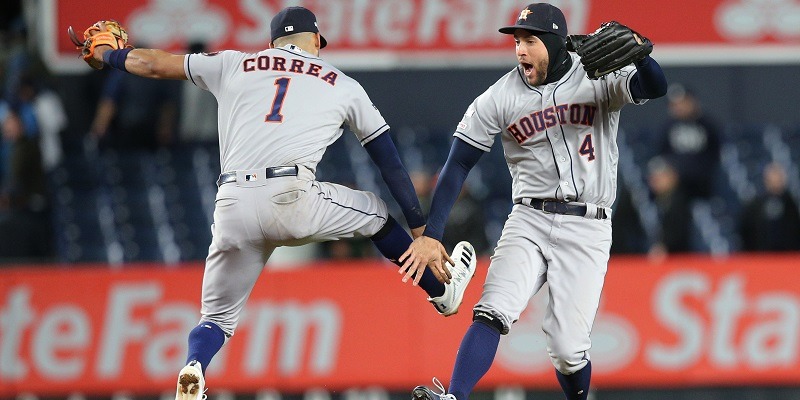 The Astros can secure their third trip to the World Series in team history and second in three seasons with a win in Game 5 on Friday. Justin Verlander will pitch for the Astros against Yankees left-hander James Paxton.

Springer helped the Astros rally from an early deficit when he blasted a 1-0 splitter from Masahiro Tanaka (2-1) with nobody out in the third after the first two hitters reached base to give Houston a 3-1 lead.

Correa, who hit the game-winning homer in the 11th inning off J.A. Happ on Sunday in Game 2, gave Houston a 6-1 lead when he slammed Chad Green’s 0-1 fastball into the left field seats in the sixth. Correa’s drive occurred after first baseman DJ LeMahieu made an error to start the inning on a grounder hit by Alex Bregman.

The Astros capitalized on LeMahieu’s second error and a fielding miscue by second baseman Gleyber Torres to add a run in the eighth.

LeMahieu booted a grounder by Yuli Gurriel, moving Bregman to third after his leadoff double. Bregman scored when Torres misplayed a short-hop grounder by Yordan Alvarez, extending Houston’s lead to 7-3.

Michael Brantley added an RBI single in the ninth after Torres made New York’s fourth error, the second by Torres.

Houston’s Zack Greinke allowed one run and three hits in 4 1/3 innings. He struck out five and walked four while throwing 83 pitches.

Greinke allowed a bases-loaded walk to Brett Gardner and the Yankees appeared poised for a big first inning as Houston began getting Brad Peacock warmed up. After a mound visit from pitching coach Brent Strom, Greinke struck out Gary Sanchez on three pitches.

The strikeout began a stretch where Greinke retired 11 of 12 hitters. He ran into trouble by allowing a single to LeMahieu and walking Aaron Judge, and was replaced by Ryan Pressly.

Pressly (1-0) walked Aaron Hicks to load the bases but struck out Torres and Edwin Encarnacion, and was awarded the win by the official scorer.

Josh James allowed Sanchez’s two-run homer with nobody out in the sixth but struck out Judge with a runner on second to end the inning. Will Harris pitched a scoreless seventh, Joe Smith got two outs in the eighth and Roberto Osuna got the final four outs.

Tanaka allowed four runs (three earned) on four hits in five-plus innings. He struck out one and walked two.

The Yankees were without Giancarlo Stanton (strained right quadriceps) for a third straight game. Stanton did some running before the game and could play in Game 5.

New York also lost CC Sabathia to an undisclosed injury in the eighth. He exited after throwing a 2-1 pitch to Springer and was replaced by Jonathan Loaisiga.