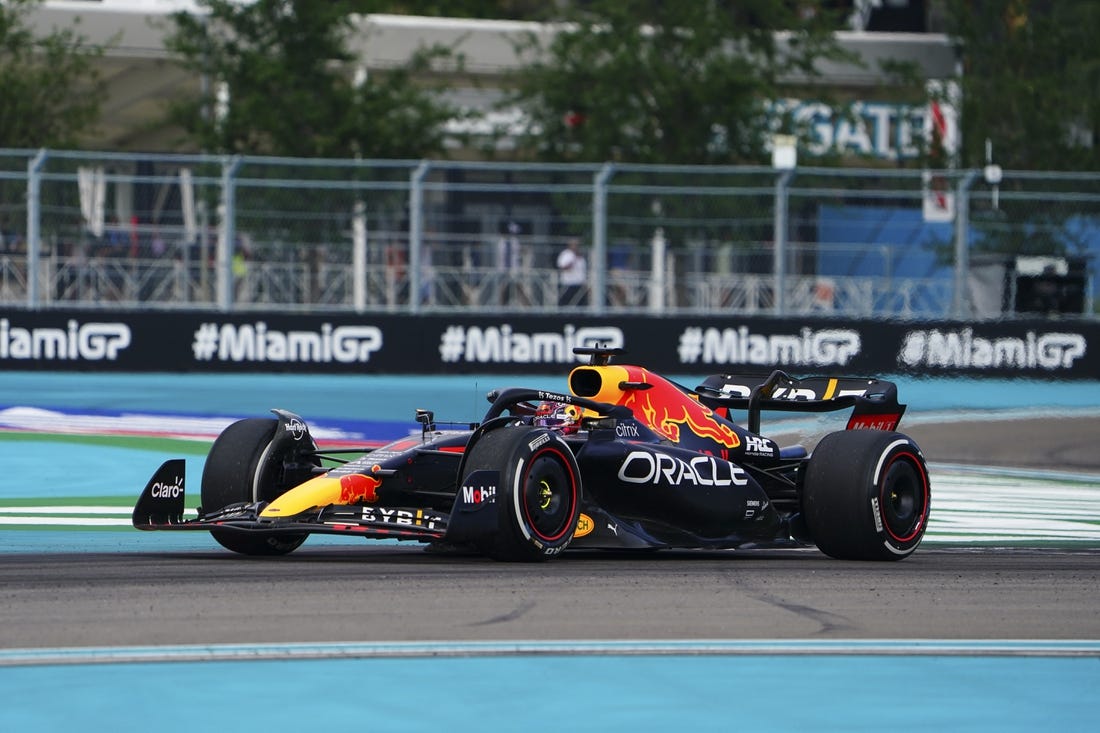 Sunday’s inaugural Miami Grand Prix Formula One race in Miami Gardens, Fla., lived up to its billing as a heavyweight battle between the series’ two points leaders — Charles Leclerc of Ferrari and Max Verstappen of Red Bull.

Verstappen came away with the victory, the second in a row and third of the year for the 2021 F1 drivers’ champion. His earlier wins had come in Saudi Arabia and Italy.

Leclerc, who led the championship by 27 points at the start of Sunday, had won in the season-opener in Bahrain and Race 3 in Australia. He finished second on Sunday, 3.7 seconds behind Verstappen.

Carlos Sainz finished third in his Ferrari while Sergio Perez was fourth for Red Bull.

Fifth was George Russell in a Mercedes. He was followed by teammate and seven-time champion Lewis Hamilton.

Verstappen had started the race alongside teammate Perez in the second row, behind the Ferraris of pole-sitter Leclerc and Sainz.

But the Dutch-Belgian Red Bull driver passed Sainz just after the standing start. He then tracked down Leclerc, caught him on Lap 8 and passed the Monaco driver on the first turn of Lap 9.

Verstappen worked his way out to a 4.6-second lead over Leclerc when the Ferrari driver pitted on Lap 25. The stop was a slow one. Verstappen pitted a lap later and responded with a quick stop. With stops completed, Verstappen’s lead had jumped to over 7 seconds.

On Lap 41 of 57, Pierre Gasly in an AlphaTauri and Lando Norris in his McLaren made contact to bring out a safety car. The crash sent some teams scrambling to pit and move to different tire compounds.

Verstappen, Leclerc, Sainz and Perez stayed out, but suddenly tightly packed at the front of the field in that order when the safety car retired on Lap 47 of 57.

Leclerc kept the pressure on Verstappen over the next seven laps until Verstappen pulled away over the final three laps.

“Towards the end I thought I could get Max at one point,” Leclerc said, “but today they had the advantage in terms of pace.”

The race was conducted on a purpose-built, 19-turn, 3.36-mile street circuit around the Hard Rock Stadium where the NFL’s Miami Dolphins play. The circuit did not get much love from drivers before the race because the surface proved extremely slippery on the portions that were not rubbered up, making for one-groove racing. The racing turned out to be better than predicted.

The two Aston Martin cars of Lance Stroll and Sebastian Vettel started the race from the pits. It was discovered that their fuel was too cold and they opted to start from the pits to avoid a penalty. They had qualified 10th and 13th, respectively, and started last and second to last.

The only American-based team, Haas F1 Racing, had a so-so day. Mick Schumacher appeared to be on the verge of collecting his first points but while running ninth, he made contact with Vettel and slipped to a 15th-place finish. Kevin Magnussen finished 16th for Haas.