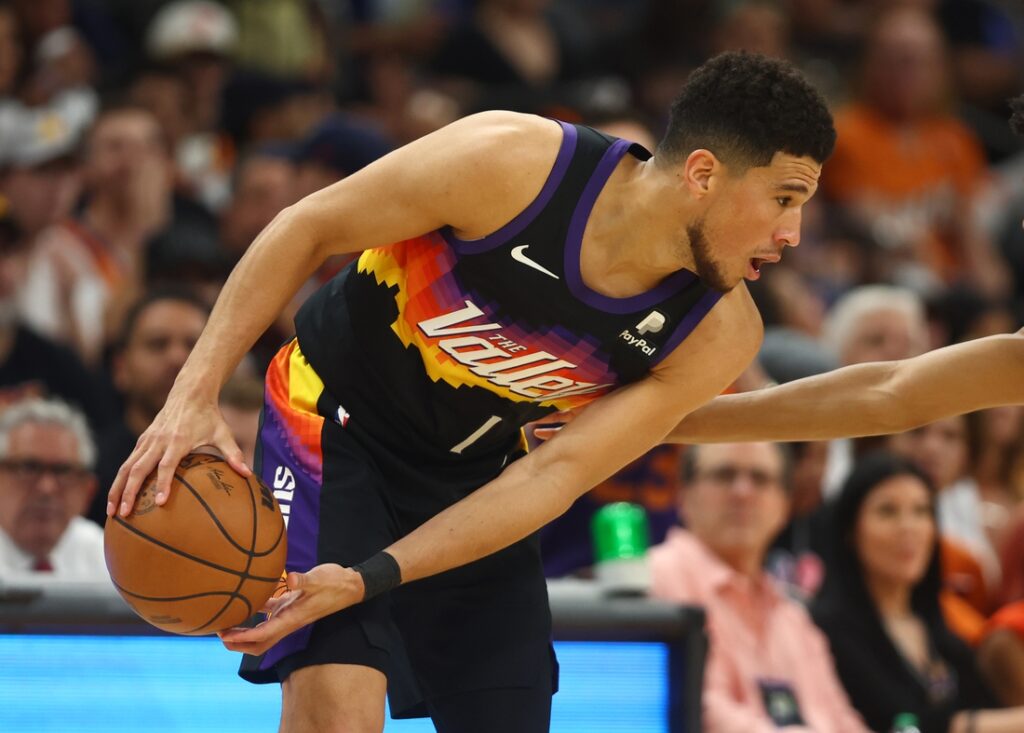 The top-seeded Phoenix Suns have had a fight on their hands in their Western Conference first-round series.

Leading scorer Devin Booker has not played since coming away with a hamstring strain in the third quarter of Game 2 and they have lost twice in the series to the eighth-seeded New Orleans Pelicans. However, Booker was upgraded to questionable on Thursday and is expected to play.

The Suns can advance to the conference semifinals if they beat the Pelicans in Game 6 on Thursday night at New Orleans. They are consensus 2.5-point favorites in Game 6. That includes at BetMGM, where they have been backed by 72 percent of the spread handle, as well as at DraftKings (83 percent).

Phoenix opened as a 2.5-point favorite at PointsBet but the line shifted to 2.0 with the Pelicans drawing 61 percent of the spread handle hours before tip-off.

Phoenix moved to the brink of advancing with a 112-97 home victory in Game 5 on Thursday night. Mikal Bridges scored a career playoff-high 31 points, played 47 minutes and helped hold Pelicans leading scorer CJ McCollum to 7-of-22 shooting.

Bridges, who hasn’t missed a game in his four-year NBA career, gave the Suns offense a lift in the absence of Booker by making 12 of 17 shots.

Booker was not expected to play in Game 6. However, ESPN reported Wednesday that it’s possible Booker could return, given how well his hamstring is progressing.

“He doesn’t miss games, he guards the best players every night and then he has 31 (points),” teammate Chris Paul said.

Paul bounced back from Game 4, when he tied his career playoff low with four points, to score 22 in Game 5 with 11 assists. Bridges took some pressure off Paul by adding five rebounds, a career-high four blocks and two steals.

“You can’t clone him, but you wish you could,” Suns coach Monty Williams said of Bridges. “He’s just one of those rare basketball players that can play that way on defense, but also give you the point production that he gave tonight.”

The Suns built a 12-point lead in the first quarter, led by as many as 17 in the second quarter and never led by fewer than seven points in the second half.

“They came out ready and we didn’t,” said Pelicans center Jonas Valanciunas, who had 17 points and 14 rebounds, after having 26 and 15 in Game 4 at home.

Brandon Ingram led the Pelicans with 22 points but crashed to the floor late in the game and moments later grabbed his right arm while losing control of the basketball. New Orleans made just one field goal in the final five minutes and none in the final three.

Pelicans coach Willie Green said Ingram would be evaluated when the team got back to New Orleans.

“We made some timely mistakes No. 1, starting with the turnovers,” Green added. “(We had) 15 turnovers for 23 points. That fuels their team, that fuels their transition opportunities. That’s an area where we know we have to be better. If we do, it’s a totally different game for us.”

McCollum missed seven of the eight 3-point shots he took as the Pelicans finished 5 of 25 (20 percent) from beyond the arc.

“I thought (the Suns) did a good job of coming out, playing desperate,” Green said. “They played hard, they competed. They kind of knocked us on our heels early.

“Give them credit. They did what they needed to do on their home floor. We’re heading back to New Orleans, and we’ll be ready to play.”

The Pelicans, who won elimination games against the San Antonio Spurs and Los Angeles Clippers in the play-in tournament, will try to force a Game 7 on Saturday night at Phoenix.