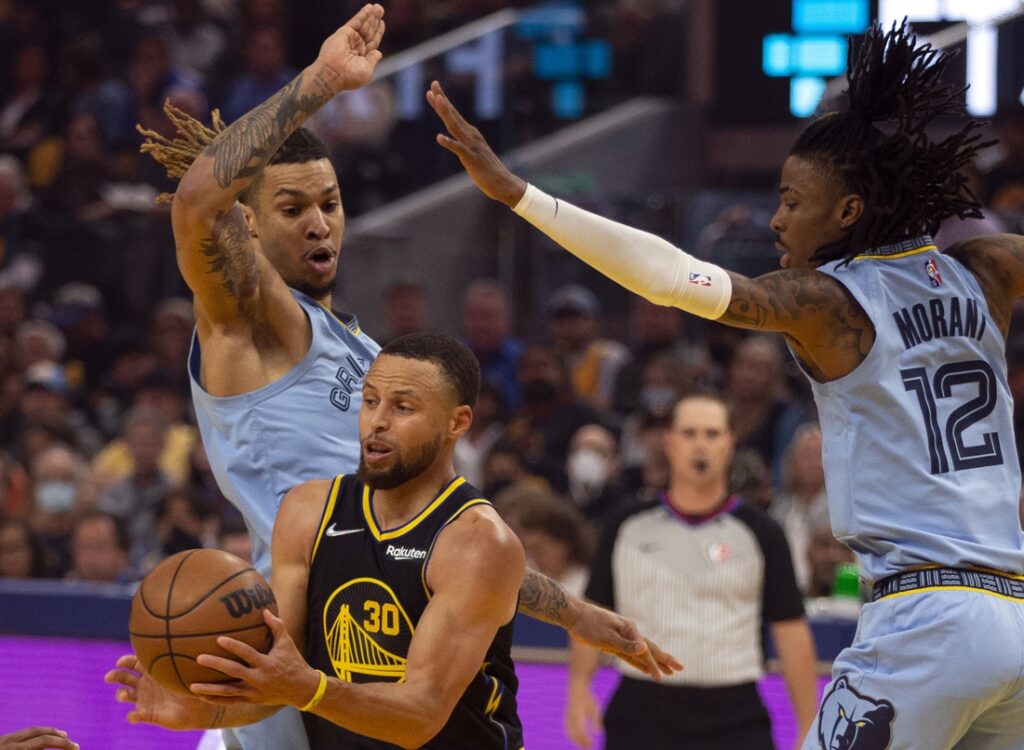 Stephen Curry, Jordan Poole and Klay Thompson combined for 78 points, and the Golden State Warriors rode an offensive masterpiece to a 142-112 victory over the visiting Memphis Grizzlies on Saturday night in San Francisco.

The Warriors took a 2-1 lead in the Western Conference semifinal series.

Curry had a team-high 30 points, Poole 27 off the bench and Thompson 21 in his most productive effort of the series, helping Golden State run off to the first one-sided victory in the best-of-seven series.

Game 4 is scheduled for Monday night, also in San Francisco.

Coming off a 47-point explosion in a Game 2, Ja Morant led all scorers again with 34 points before taking the final 6:19 of the game off to have his right knee examined.

Morant suffered the injury seconds earlier when it appeared he clashed knees with Poole. The Memphis star played for about another minute, but then with his team down by 17 points, Grizzlies coach Taylor Jenkins pulled Morant and sent him straight to the locker room.

Morant and Jaren Jackson Jr. combined for four of five Memphis 3-pointers in the game’s first five minutes as the Grizzlies burst out to an 18-8 lead.

The Grizzlies led by as many as 13 before Golden State dominated the final 42 minutes of the game, shooting 63.1 percent overall and 53.1 percent on 3-pointers.

On a night when he passed Paul Pierce and Kevin McHale to move into 21st place on the NBA’s all-time postseason scoring list, Curry topped 30 points for the fourth time in these playoffs and 44th time in his career.

Thompson was Golden State’s top shooter from beyond the arc, going 4-for-6. Thompson also found time for a game-high nine rebounds, while Draymond Green chipped in with five points, five rebounds and a game-high eight assists.

Morant finished 13-for-21 from the field and 4-for-7 on 3-pointers for the Grizzlies, who shot 43.5 percent overall and 37.2 percent on 3-pointers. He also had team-highs in assists with seven and steals with three.

Desmond Bane had his best game of the series with 16 points for the Grizzlies, while Jackson totaled 15 and De’Anthony Melton 12.