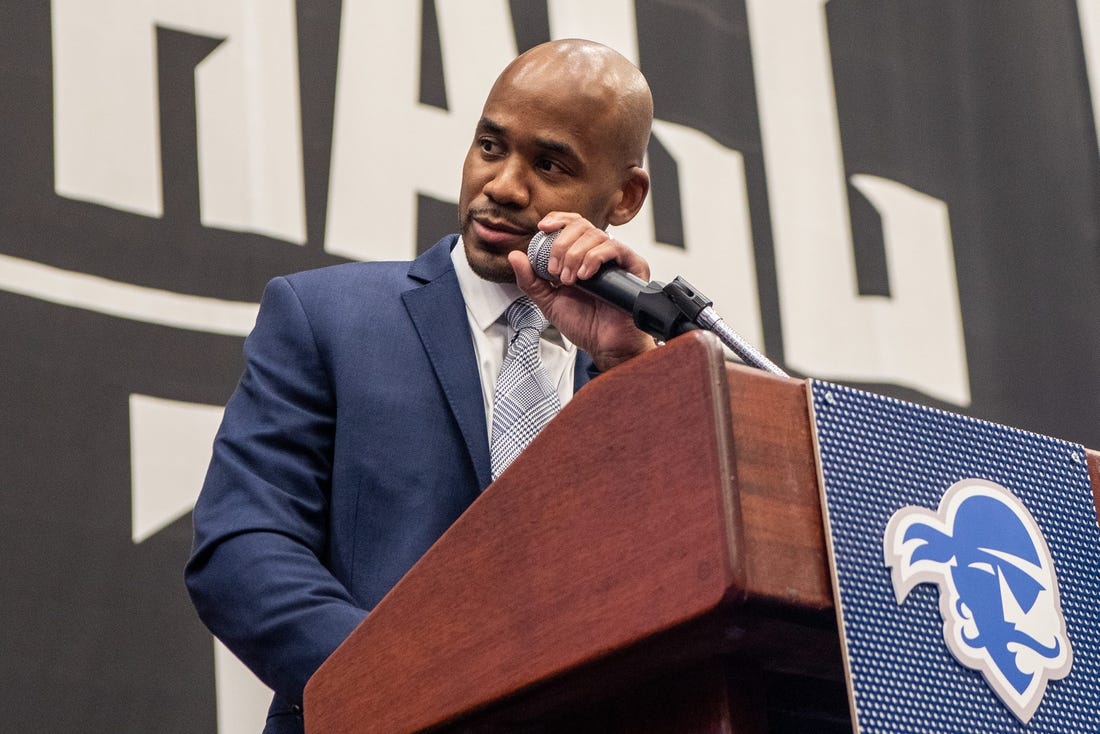 NEW YORK — Shaheen Holloway looked out at a sea of hopeful faces March 31, no doubt feeling the weight of expectations as he was introduced as coach of his alma mater, Seton Hall, after orchestrating the most surprising Cinderella run in NCAA Tournament history.

Then he turned up the pressure on himself.

“Just know, I’m not going to mess this up,” Holloway said to conclude his opening remarks. “I can’t mess it up. It’s way too important to me.”

Almost six months of media and alumni obligations later, Holloway said he’s eager to focus on coaching the Pirates, whose fans have sky-high hopes after watching him guide tiny Saint Peter’s to the Elite Eight.

“For me, I went to Seton Hall as a young boy and left as a man,” Holloway said at Big East media day. “I want to do well for this school. I want to win. I want to take it to new heights. I want to do what (former Pirates coach) P.J. Carlesimo did. What he did for a small school at the time is why we’re here today, to be totally honest with you.”

Holloway, 46, was the star point guard for a Seton Hall team that reached the Sweet 16 in 2000, though he missed their eventual loss in that round with a devastating ankle injury. His quick climb up the coaching ranks included eight seasons as an assistant to Kevin Willard at Seton Hall before athletic director Bryan Felt hired him at Saint Peter’s, a Jersey City mid-major with limited resources.

Felt, now Seton Hall’s AD, said in March that Holloway was the only candidate he spoke to after learning Willard would leave the program for Maryland. Holloway was still coaching, so Felt had to wait. When the Peacocks’ postseason ended with a loss to North Carolina, the process accelerated, resulting in a six-year contract.

Holloway tries to use three guards on the floor at all times, spreads minutes throughout his bench and values players who can man multiple positions. Most of all, his teams must be ready to scrap and claw, to meld to a particular identity.

He’s joined a group of Big East basketball coaches who consider themselves a brotherhood — and Holloway already knows most of them in some fashion.

“He’s always been like a brother of mine, somebody who I cheer for all the time,” Providence coach Ed Cooley said. “I check in on him and talk to him about just his headspace. There’s only so much headspace we have up there and it could be occupied when you take over a program like Seton Hall, who’s gonna have high expectations. They expect to be a Big East champion and a national champion.”

“I love his old-school values as a coach,” added UConn’s Dan Hurley, who played point guard at Seton Hall before Holloway arrived. “He’s got an incredibly high standard. I coach the same way, and I think we mirror a lot of the way we go about our job. … We’re not the easiest people to play for, but I think we make our players better, we build character and we win a lot of games.”

Those high standards and hard days of practice have made an early impression on graduate guard Jamir Harris.

“Just our level of intensity day in and day out that Coach Sha brings, it’s infectious and spreads throughout the entire team,” Harris said. “Our practices are so intense, so physical, and that’s what Big East basketball is all about.”

The Pirates were picked seventh of 11 in the Big East preseason coaches’ poll. They’ll turn to a mix of veterans, led by second-team All-Big East guard Kadary Richmond, and experienced transfers Holloway recruited out of the portal, like ex-Clemson guard Al-Amir Dawes.

Seton Hall’s second game of the new season, by the way, is Nov. 12 against Saint Peter’s. You won’t get Holloway to dish on how emotional that game might be for him.

“I’m looking forward to tomorrow,” Holloway said. “Because if I look ahead, then I’m doing my team a terrible injustice right now. We’re trying to get better every day.”