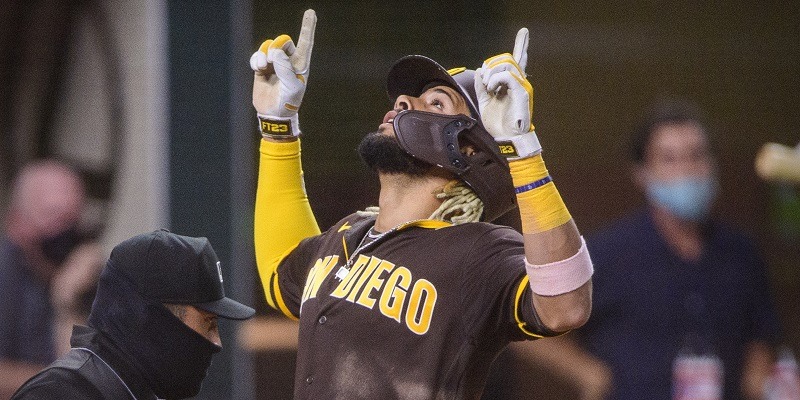 A pair of pitchers came to the defense of Fernando Tatis Jr. after the San Diego Padres’ young slugger belted his first career grand slam on a 3-0 pitch in what resulted in a 14-4 rout of the Texas Rangers on Monday.

Rangers manager Chris Woodward and Padres manager Jayce Tingler took issue with Tatis for swinging at the pitch with a seven-run lead in the eighth inning. The 21-year-old Tatis, who leads the majors with 11 homers, even showed contrition after the game.

“I’ve been in this game since I was a kid,” Tatis said. “I know a lot of unwritten rules. I was kind of lost on this. Those experiences, you have to learn. Probably next time, I’ll take a pitch.”

McHugh tweeted that “swinging in a 3-0 count should not be against any rules, no matter the score.”

Swinging in a 3-0 count should not be against any rules, no matter the score.

The guys who will never “give you a pitch” at the plate are the toughest AB’s.

Woodward and Tingler shared their takes following the game.

“I didn’t like it, personally,” Woodward said. “But, like I said, the norms are being challenged on a daily basis. So just because I don’t like it doesn’t mean it’s not right. I don’t think we liked it as a group.”

“(Tatis is) young, a free spirit and focused and all those things,” said Tingler, who noted that Tatis missed a take sign on the 3-0 pitch. “That’s the last thing that we’ll ever take away. It’s a learning opportunity and that’s it. He’ll grow from it.”

The Rangers referencing the unwritten rules of baseball comes less than one year removed from Texas first baseman Ronald Guzman intentionally failing to catch a foul ball, a move that allowed Mike Minor the opportunity to record his 200th strikeout. Minor did so on the very next pitch and left the game after 8 2/3 innings in a 7-5 win over the Red Sox on Sept. 26.

“I didn’t love the idea that we dropped a popup at the end, but on the other side of that, they swung at three pitches in a row in the eighth inning down by two,” Woodward said at the time.