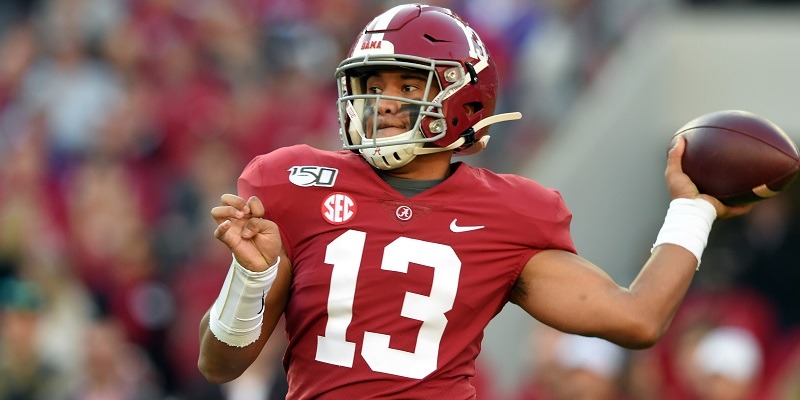 The NFL Draft is providing some welcome action for sports bettors, and at least a short-term boost for sportsbooks hit hard by the shutdown of all major sports due to the coronavirus pandemic.

PointsBet is offering approximately 175 markets for the 2020 NFL Draft, and more than a week out from the event the book has seen almost as much action as it did for the entire 2019 draft. PointsBet director of communications Patrick Eichner said the company is expecting 2 1/2 more turnover year-over-year by the end of the 2020 draft.

The company is projecting the draft to be “on par” with a standalone marquee NFL event such as a Monday or Thursday night primetime game.

Some of the heaviest action has been around Tua Tagovailoa. With the Alabama star’s stock varying heavily depending on how teams view his recovery from hip surgery, some analysts believe Tagovailoa could be the second quarterback selected after projected top pick Joe Burrow of LSU, while others anticipate a potential slide into the back half of the first round.

The Los Angeles Chargers are another team likely in the market for a quarterback, but they may have to trade up from No. 6 to have a shot at Tagovailoa. They do have the second-lowest odds at PointsBet (+155), but less than 1 percent of bettors have jumped on the action, compared to 14 percent for the Detroit Lions, +3000, with the No. 3 overall pick and 13 percent for the Jacksonville Jaguars, +1100 at No. 9.

The only other team representing double-digits in bet count is New England at +1600. The Patriots don’t currently pick until No. 23 overall, but 11 percent of the Tagovailoa prop bets have been on him landing with New England.

While many bettors see Tagovailoa stepping into Tom Brady’s shoes in New England, there has been “some sharp money” on him serving as Brady’s understudy in Tampa Bay. The Bucs’ odds of landing Tagovailoa have moved from +8000 to +2500, according to Eichner.

“The prop bets make every draft pick significant,” Rush Street Interactive COO Mattias Stetz said in a statement. “Selections are rarely cut and dry for an entire draft round.”

BetRivers.com and PlaySugarHouse.com are offering an over/under prop of 4.5 quarterbacks being selected in the first round, with the over at +340 and the under at -455. Tagovailoa is -286 to be the second quarterback off the board, followed by Oregon’s Justin Herbert at +180.

Alabama and LSU lead the way on school-specific props, with both having 5.5 over/unders for the number of players selected in the first round.