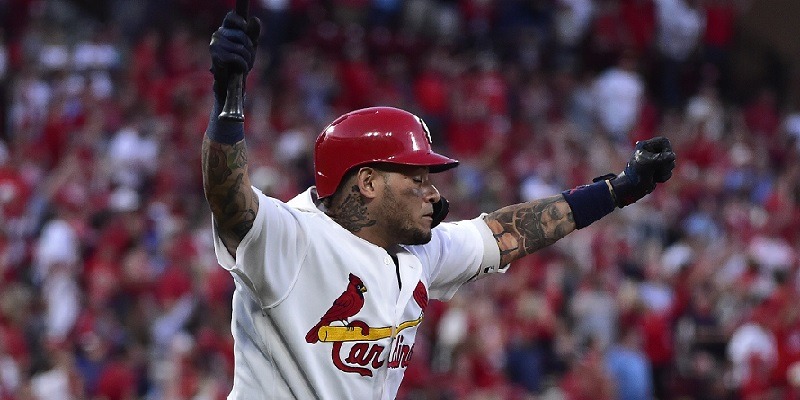 Yadier Molina’s 10th-inning sacrifice fly lifted the St. Louis Cardinals to a 5-4 victory over the visiting Atlanta Braves on Monday and sent the National League Division Series to a decisive fifth game.

The series will conclude Wednesday in Atlanta, with the winner advancing to meet the Los Angeles Dodgers or the Washington Nationals in the NL Championship Series.

Molina tied the game 4-4 with his eighth-inning RBI single, then decided it in the 10th by driving home Kolten Wong from third base with his fly ball to left field.

Miles Mikolas (1-0), the eighth Cardinals pitcher, pitched one scoreless inning for the victory. Julio Teheran (0-1), the seventh Braves pitcher, took the loss by allowing one run in two-thirds of an inning.

Ozzie Albies drove in three runs with a two-run homer and a sacrifice fly for the Braves. Dansby Swanson reached base three times (walk, single, double) and scored twice, and Ronald Acuna Jr. went 4-for-5.

Goldschmidt and Ozuna hit back-to-back homers in the first inning to give the Cardinals a quick 2-0 lead.

Swanson led off the third inning with a single, moved to third on Acuna’s single to right field and scored on Albies’ sacrifice fly to cut the deficit to 2-1.

Ozuna’s second long homer, a leadoff shot in the fourth inning, pushed the Cardinals’ lead to 3-1.

The Braves chased Hudson with three runs in the fifth inning. Swanson started the rally with a one-out double that caromed off third base.

Swanson moved to third on a passed ball and scored when Carpenter couldn’t field Adam Duvall’s hard smash to third. Albies launched his homer one out later to give the Braves a 4-3 lead.

Both teams stranded runners in scoring position in the ninth inning, so the game extended into extra innings.

Wong greeted Teheran with a ground-rule double to left leading off the 10th. After Goldschmidt was intentionally walked, Ozuna hit into a forceout that moved Wong to third and set up Molina’s heroics.