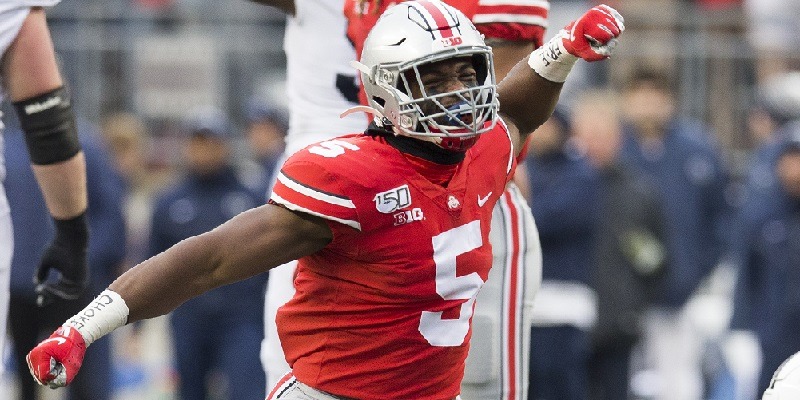 Ohio State vaulted past LSU into the top spot in the College Football Playoff rankings on Tuesday night, a significant change heading into the final week of the regular season.

The Buckeyes — who lead the nation in scoring (49.4 points per game) and scoring defense (10.5 points allowed per game) — furthered their case with a 28-17 victory over then-No. 8 Penn State last week.

“Ohio State has been a complete team, and that win over Penn State was their third win over teams we currently have ranked in the top 19,” said selection committee chairman Rob Mullens, the athletic director at Oregon, referring to games against now-No. 10 Penn State, now-No. 12 Wisconsin and now-No. 19 Cincinnati.

“It’s that complete team piece. Ohio State has been really good on both sides of the ball.”

The No. 1 team will play the fourth seed in the playoff semifinals, which means, if projections hold, Ohio State (11-0) would avoid No. 3 Clemson (11-0), which is undefeated and the reigning national champion. There appears to be a gap from the third to the fourth seed, which is currently Georgia (10-1).

If it keeps winning, Ohio State has a good chance of staying at No. 1 based on the strength of its next two opponents. The Buckeyes play at No. 13 Michigan on Saturday before taking on either No. 8 Minnesota or Wisconsin again in the Big Ten title game.

A reminder: AP voters do not agree with the CFP Committee.

No. 2 LSU (11-0) finishes at home against Texas A&M and then will play Georgia in the SEC Championship Game. The selection committee likely will be watching how the Tigers’ defense fares. LSU has allowed 98 points in the past three games, showing just enough weakness for the committee to justify a drop to the second spot, even with the Tigers holding three victories over teams currently in the top 15.

“This week, the committee felt that that win over Penn State solidified that Ohio State is a little better on the defensive side of the ball,” Mullens said.

Crimson Tide on the outside looking in

No. 5 Alabama (10-1), with backup quarterback Mac Jones, needs to win at No. 15 Auburn this week and root for a Georgia loss in the SEC title game to have a chance to make the playoffs for the sixth consecutive season.

Even then, the Crimson Tide also would have to hold off potential conference champions in the Pac-12 (No. 6 Utah), Big 12 (No. 7 Oklahoma or No. 9 Baylor) and Big Ten (Minnesota).

Memphis, at No. 18, remained the highest-ranked team from the Group of Five conferences (American Athletic, Conference USA, Mid-American, Mountain West, Sun Belt). The Tigers host Cincinnati on Friday, and the teams could meet again the following week in the AAC title game.

Boise State of the Mountain West is No. 20.

The highest-ranked team among the Group of Five conferences earns a spot in a New Year’s Six Bowl, which this season will be the Cotton Bowl in Arlington, Texas.