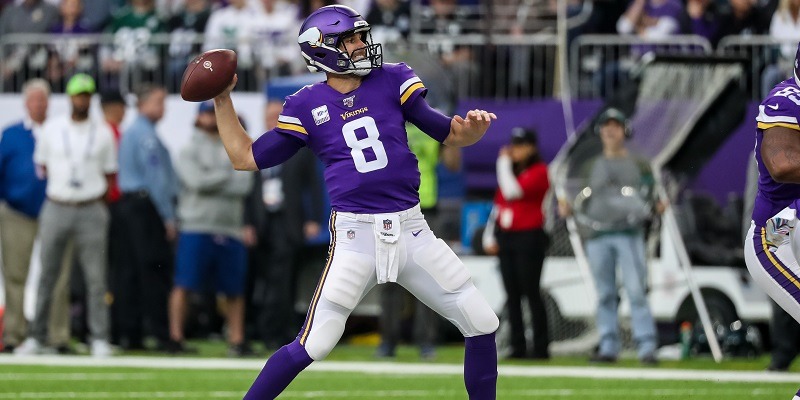 After their passing attack bottomed out just two weeks ago in Chicago, the Minnesota Vikings and Kirk Cousins sure righted things in a heartbeat.

The Vikings (4-2) didn’t need many changes to outclass the New York Giants last week, but they opened things up Sunday against the Philadelphia Eagles, knowing the run game alone was not enough.

All were employed Sunday, catering heavily to Thielen and Diggs early to placate any lingering frustrations. Stefanski used both wideouts early on quick screens, exotic runs (reverse handoff for Diggs, reverse toss for Thielen), double moves and “shot” plays off play-action. He even called a double-reverse pass for Diggs.

The Vikings ran a Yankee concept off play-action against the Eagles’ Cover-4 (aka quarters). From the right slot, Thielen ran a deep over route toward safety Rodney McLeod. From the left, Diggs’ skinny post perfectly bisected the quarter-field zones of cornerback Rasul Douglas (outside) and McLeod (inside). Thielen drew McLeod, leaving Douglas alone on Diggs and chasing from an outside position. Cousins’ perfect throw sealed an easy touchdown.

Kirk Cousins’ first TD to Stefon Diggs was a classic Kubiak PA Yankee concept against Eagles’ Cover-4 (you might recognize it as the play Jared Goff missed twice in Super Bowl LIII).

(You might recognize the design from Super Bowl LIII. The Rams ran it twice vs. the Patriots and sprung the post open both times, but Jared Goff failed to take advantage, with Jason McCourty famously intervening on the second.)

Minnesota barely missed another long touchdown on a similar, shrewd design just before half. Diggs ran the same skinny post from the left, again facing Douglas’ outside leverage (this time in Cover-3), but was sprung open differently.

Knowing Eagles coordinator Jim Schwartz’s Cover-3 rules, the Vikings ran Thielen in orbit motion from right to left after the snap, drawing McLeod down from the deep middle to meet Thielen. Cornerback Sidney Jones — initially aligned over Thielen — had to drop to centerfield to “replace” McLeod, but he retreated too slowly to meet Diggs. Cousins narrowly overthrew it (and Diggs didn’t dive).

Cousins barely overthrew another long TD to Diggs on a terrific design by Stefanski/Kubiak.

Kubiak/Stefanski were on fire against the Eagles, especially off play action.

Here, they bring Irv Smith Jr. in motion, run him on a glance wheel route behind Thielen, who clears out Douglas (already beaten deep a few times) on the post. Wide open, easy read and throw#Skol pic.twitter.com/qEtoPqOO9F

Most promising for Cousins

Many big gains Sunday required minimal processing, as the design opened the primary route, but nonetheless, Cousins hit most throws. His worst miss was putting too much air under a corner route to Thielen, narrowly missing a 21-yard touchdown on third-and-8.

Cousins’ worst miss was too much air under a corner route on a Dusty concept. Thielen has to wait on it, can’t get two feet. FG instead of 21-yard TD on 3rd-and-8

Still, Cousins did use hard count to reveal blitz, got it picked up, made the right read. Nearly a great play#Skol pic.twitter.com/MPKPUWum8A

More importantly, Cousins showed the willing trigger he lacked early in the season, nailing a few tight-window throws while trusting his receivers.

That included a 20-yarder with anticipation to Thielen to convert third-and-13, two rockets near the sideline while rolling right (Diggs dropped one that turned into an interception) and a bullet to Laquon Treadwell on the left sideline while falling away on fourth-and-5.

Long TDs are nice, but these were Kirk Cousins’ best plays.

Tight windows (with some movement, pressure) on 3rd-and-long (and 4th-and-5). Razor sharp accuracy.

It’s a tad riskier (INT obviously on Diggs, though), but Vikings need this Cousins, the one who turns it loose#Skol pic.twitter.com/ipIfPaNuZ4

An aggressive Cousins brings turnover risk, but he’s far more effective than the tepid Cousins who simply tries to avoid mistakes. With quality wideouts and a sound scheme, Cousins must keep turning it loose.

Not everything is fixed, yet

You might be wondering why I haven’t mentioned Diggs’ 51-yard touchdown yet. That’s because it was an uncommonly poor coverage bust, not the offense’s doing.

The whole Eagles’ defense played Cover-3 except both cornerbacks, who somehow got the same incorrect call. Both played Cover-2, rerouting and passing off perimeter go routes to … nobody. Cousins had his choice of walk-in touchdowns. That sort of bust is extremely rare, the kind of luck Minnesota can’t count on again.

Stefon Diggs’ 2nd TD was an inexplicable Eagles blown coverage. Play-action NOT the cause.

Both CBs play Cover-2: reroute WRs, roll up in flat. But everyone else plays Cover-3. Cousins has 2 WRs running scot free.

How do both CBs get one call and everyone else another?#Skol pic.twitter.com/jgIW8bOl7t

The Eagles weren’t busting coverages all day, but they made several mistakes and were easily suckered into the Vikings’ traps. Philadelphia also struggled to get pressure (one sack, four QB hits), which was a mild surprise.

The sailing won’t always be so smooth. Game script has defined the Vikings so far and did again Sunday, with the early lead aiding the run and play-action game. That shelters Cousins and the offensive line, which is better run-blocking than in protection.