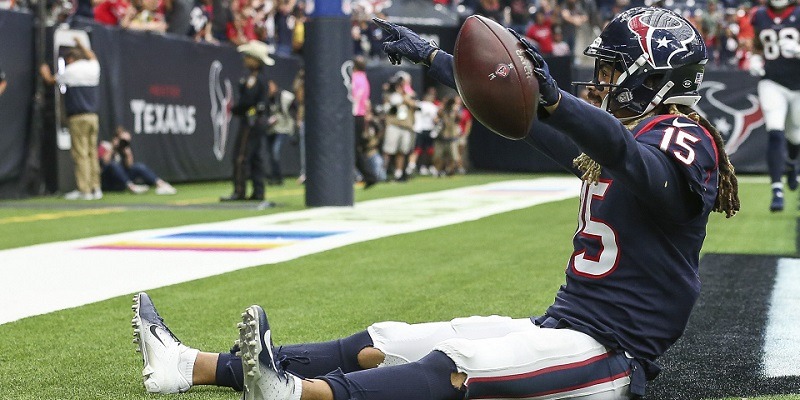 Entering Week 5, Houston Texans wideout Will Fuller had 14 catches (23 targets) for 189 yards and no touchdowns in the first.

Against the Atlanta Falcons on Sunday, Fuller racked up 14 grabs (on 16 targets) for 217 yards and three scores. It’s not an exaggeration to say he was a few feet away from making 16 catches for 255 yards and six (!) touchdowns.

We dug into the film to explain how it happened, what changed from the first four weeks of the season, and what to expect moving forward.

Injuries (17 games missed) have been the biggest cap on Fuller’s production since he entered the league in 2016. He’s been healthy this season — making his slow start more head-scratching. But the most obvious explanation is bad luck and missed chances.

In Week 1, Deshaun Watson underthrew a post to Fuller on a would-be 94-yard touchdown. The wideout came back and made an acrobatic grab for a gain of 54.

In Week 2, Watson delivered what would have been a 51-yard gain on a sail route, but Fuller let the ball bounce off his chest. Later, Watson just missed Fuller on a deep fade for a possible TD.

In Week 3, Watson hit Fuller for 30 yards on a deep over route, but the ball was slightly underthrown, preventing a 33-yard TD.

In Week 4, Watson threw a hair late and behind Fuller for a potential 20-yard TD, then overthrew a likely 75-yard TD on another post less than 10 minutes later.

While he goes through quiet stretches against press coverage, Fuller’s speed provides multiple big-play opportunities weekly. No quarterback hits every open receiver, but Watson missed some he normally makes.

Sunday vs. the Falcons:

Fuller’s breakout was overdue, much to the chagrin of the Falcons. Shrewd scheming by Texans coach Bill O’Brien certainly helped.

Houston’s formations put Fuller either in the slot or tightly aligned in condensed sets and stacks, often after motion. That shielded him from press coverage, which he faced on just one of 16 targets.

Fuller with an open runway is terrifying. Clean releases get him right up to speed to blow by defenders or get them retreating before breaking routes off. On a 32-yard gain in the third quarter, his vertical release backed cornerback Desmond Trufant several yards off, opening a void outside.

Fuller also feasted on speed outs — a quick out with a rounded turn (instead of a sharp break) — under generous cushion. He then capitalized on that tendency by converting a quick out into an out-and-up, burning Trufant for a 44-yard touchdown to seal the win. (The conversion appeared to be by design, after his initial route was covered).

Not known as a technician, Fuller maximized O’Brien’s designs with nuanced route-running.

On his 6-yard TD, Fuller released patiently to sell a play-fake, convincing Trufant he was blocking safety Ricardo Allen. As both defensive backs eyed the backfield, Fuller broke to the corner and came wide open.

Fuller’s 33-yard TD came from a post on a Yankee concept, with DeAndre Hopkins running a deep over from the other side. Not rushing initially, Fuller aimed his stem directly at Allen — the single-high safety — to freeze him. As Allen also watched Hopkins, Fuller nodded to the corner before breaking across Allen’s face and spinning him around. Watson’s throw was well behind, but Fuller adjusted and made the contested grab.

Later that quarter, Fuller again used patience for 36 yards on third-and-3. Stacked behind Hopkins, Fuller skipped off the line like he was going to break inside, using Hopkins to rub cornerback Isaiah Oliver. Oliver bit and started inside, just as Fuller cut back outside into acres of space.

Fuller’s hands will never be purely natural. He bobbled the first TD, and later let a 28-yard gain bounce off his chest.

But beyond the drop, his day could have been even better. He was tackled twice inside the 1-yard line — setting up two other Texans TDs — and Watson just missed him for a would-be 7-yard score in the third quarter. Fuller beat press coverage on an out route from the slot on third-and-4, but Watson threw too wide, leading to a field goal.

Fuller isn’t going to score three times a week, but he’s come a long way from the one-trick-pony speedster he was at Notre Dame. He’s developed route-running savvy and patience, and he knows how to use his deceleration as effectively as his acceleration.

He’s also a perfect complement to Hopkins, a key piece on O’Brien’s designs and should still improve chemistry with Watson — Sunday was just their 16th game together. All signs suggest Sunday was closer to the norm than Fuller’s slow start.

If that’s true, the former first-round pick will command a hefty contract before long. Fuller has a $10.2 million fifth-year option in 2020 before free agency. He will draw major interest if the Texans don’t lock him up.