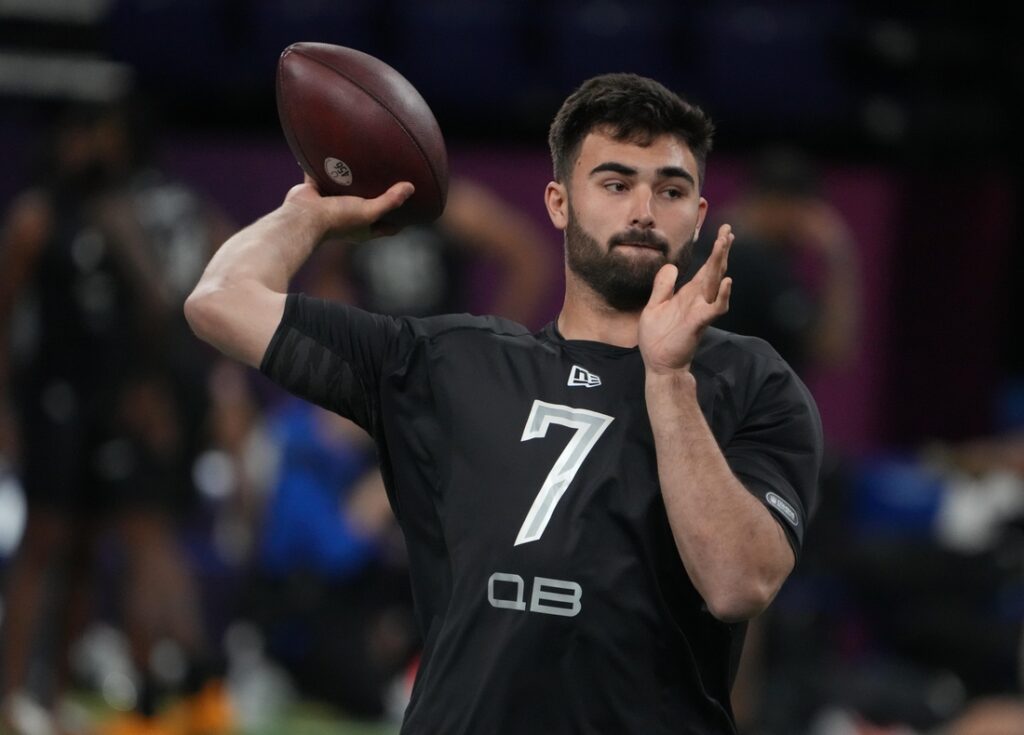 Odds were very slim that Sam Howell would hear his name called on the initial day of the NFL draft, but it seemed certain he would be selected on the second.

Instead, it took until Day Three and the first pick of the fifth round for the North Carolina quarterback to be picked. The Washington Commanders ended his long agonizing wait by choosing him with the 144th overall selection.

“I had no expectations coming into the draft,” Howell said. “Obviously everyone wants to be a first-round pick. I just want to get on a good team. I’m super blessed.”

The final four rounds of the draft were held Saturday in Las Vegas and Howell’s plunge was one of the biggest surprises of the festivities.

Most draft prognosticators pegged Howell as a second-round pick. Nobody was forecasting he’d last until the fifth round.

Pitt’s Kenny Pickett was the lone quarterback to go in Thursday’s first round as the No. 20 overall pick to the Pittsburgh Steelers.

No quarterbacks were tabbed in the second round. Cincinnati’s Desmond Ridder went in the third round (No. 74 overall) to the Atlanta Falcons, Liberty’s Malik Willis was chosen 86th by the Tennessee Titans and Matt Corral of Ole Miss was No. 94 by the Carolina Panthers.

Howell wasn’t even the first quarterback drafted on Saturday: Western Kentucky’s Bailey Zappe went to the New England Patriots in the fourth round (No. 137 overall).

Meanwhile, Howell was in wait-and-see mode while watching the draft in his hometown of Charlotte, N.C., with family and friends. Not an easy situation for someone who set North Carolina records of 10,283 career passing yards and 92 touchdown tosses.

“It was a little stressful, but at the same time I was trusting God,” Howell said. “I was waiting for a call, and I’m so glad it was Washington that called. This is a perfect spot for me. It’s a team I wanted to play for all along, so I’m fired up.”

Howell may not see the field much this season as the Commanders traded for Carson Wentz earlier this offseason.

The Patriots’ pick of Zappe was interesting as the club selected Mac Jones in the first round of the 2021 draft.

Zappe spent four college seasons at Houston Baptist before transferring to Western Kentucky. He passed for 5,967 yards, 62 touchdowns and 11 interceptions in his one season with the Hilltoppers. The yardage and touchdowns led the nation.

Zappe was Conference USA’s Most Valuable Player but the pinball-type season didn’t overwhelm many NFL scouts. Not that Zappe cares.

“I don’t really worry about the naysayers and the critics,” Zappe said. “The Patriots believe in me. … Those are the people that I’m going to try to prove right.”

It’s not often that a punter gets drafted lower than his reputation but that occurred Saturday when San Diego State’s Matt Araiza went with the first pick of the sixth round to the Buffalo Bills and was just the third punter selected.

Araiza set an NCAA record with a 51.19 average last season and earned the nickname “Punt God” for his booming efforts. He won the Ray Guy Award as the nation’s top punter and had six punts of at least 70 yards — including boots of 86 and 81 yards.

Araiza was a unanimous first-team All-American. The only other San Diego State player to sweep the first-team honors was legendary runner Marshall Faulk, who did it in 1992 and 1993.

Penn State’s Jordan Stout was the first punter off the board. He went in the fourth round (No. 130 overall) to the Baltimore Ravens. Three picks later, the Tampa Bay Buccaneers chose Georgia’s Jake Camarda.

“I’ll have a lot of motivation to dominate this season,” Araiza told Buffalo reporters.

Georgia cornerback Derion Kendrick (Los Angeles Rams) and tight end John FitzPatrick (Atlanta Falcons) were chosen on back-to-back picks in the sixth round to give the Bulldogs a record 15 selections during the league’s seven-round draft era that began in 1994. Georgia set the tone Thursday with five first-round picks, all on defense — which also marked a first-round record out of one school on one side of the ball.

Iowa State quarterback Brock Purdy was the 262nd and final pick by the San Francisco 49ers to earn this year’s tag of “Mr. Irrelevant.” Purdy set school records of 12,170 yards and 81 touchdowns with the Cyclones but was downgraded due to his 6-foot height and average arm strength.

Purdy was the ninth quarterback selected in the three-day draft.