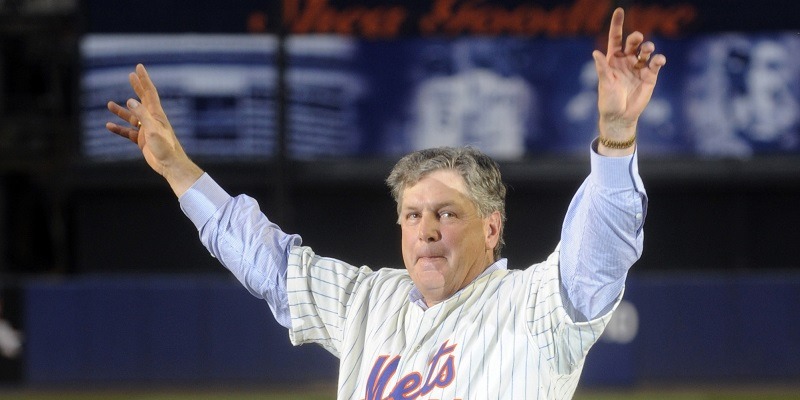 He died in his sleep at his home in Calistoga, Calif., from complications of Lewy body dementia and COVID-19, according to a statement from the National Baseball Hall of Fame in Cooperstown, N.Y.

The New York Post reported that the death was from complications of Lyme disease and dementia.

Seaver cited his battle with dementia when he said in March 2019 that he was withdrawing from public life.

In the statement from the Hall of Fame, Seaver’s wife, Nancy, and daughters Sarah and Anne said: “We are heartbroken to share that our beloved husband and father has passed away. We send our love out to his fans, as we mourn his loss with you.”

The right-hander was elected to the Hall of Fame in his first year of eligibility in 1992 with what at the time was the highest percentage of votes received — 98.84 percent.

Mets owners Fred and Jeff Wilpon said in a statement: “We are devastated to learn of the passing of Mets Legend and Baseball Hall of Famer Tom Seaver. Tom was nicknamed ‘The Franchise’ and ‘Tom Terrific’ because of how valuable he truly was to our organization and our loyal fans, as his #41 was the first player number retired by the organization in 1988.

“He was simply the greatest Mets player of all-time and among the best to ever play the game which culminated with his near unanimous induction into the National Baseball Hall of Fame in 1992.

“Beyond the multitude of awards, records, accolades, World Series Championship, All-Star appearances, and just overall brilliance, we will always remember Tom for his passion and devotion to his family, the game of baseball, and his vineyard.”

MLB commissioner Rob Manfred called Seaver “a gentleman who represented the best of our National Pastime.”

“He was synonymous with the New York Mets and their unforgettable 1969 season,” Manfred added in a statement. “After their improbable World Series Championship, Tom became a household name to baseball fans — a responsibility he carried out with distinction throughout his life.”

Seaver, the National League Rookie of the Year in 197, finished with a career record was 311-205 with a 2.86 ERA and 3,640 strikeouts. He led the NL in strikeouts five times. He won his first Cy Young Award in 1969, when the long stumbling franchise surprised the baseball world by advancing to the World Series and defeating the Baltimore Orioles in five games.

I am deeply saddened of the passing of Tom Seaver. I had the honor of unsuccessfully hitting against him & having as a teammate. He is the greatest Met of all time. No one will ever surpass him that wears the orange & blue. My condolences to Nancy & his family. Tears.

Seaver also finished second in the NL Most Valuable Player voting that season as he went 25-7 with a 2.25 ERA.

“Tom’s fierceness as a competitor was matched by his daily preparation and workout regimen,” Tim Mead, the Hall of Fame and Museum president, said in a statement.

“Intelligent, passionate, disciplined, respectful and driven, he was as fine a pitcher as the game has seen,” Mead added.

After a midseason trade from the Mets to the Cincinnati Reds in 1977, Seaver went on to pitch his only no-hitter with the Reds, turning the trick against the Cardinals in 1978.

“Tom Seaver was one of the best and most inspirational pitchers to play the game,” Reds CEO Bob Castellini said in a statement. “We are grateful that Tom’s Hall of Fame career included time with the Reds. We are proud to count his name among the greats in the Reds Hall of Fame. He will be missed.”