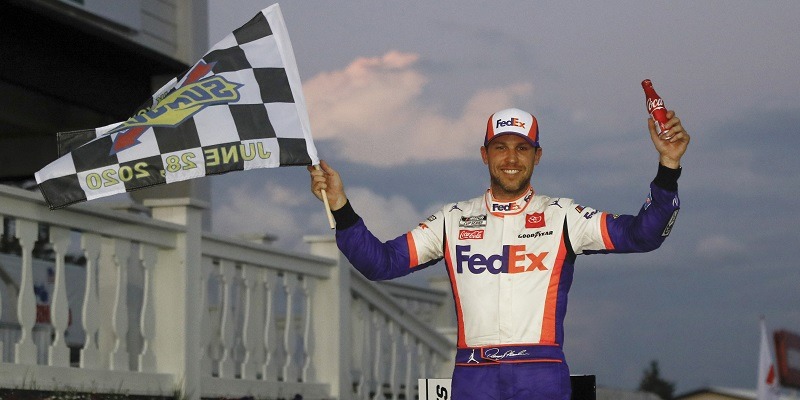 In Saturday’s first race of the weekend’s NASCAR Cup Series doubleheader at Pocono Raceway, Denny Hamlin’s shot at victory came apart when his car developed a vibration in the late going. On Sunday, Hamlin went vibration-free and the result was a victory in the nightcap.

Despite weather delays forcing the Pocono 350 to conclude with the sun sunk below the Pennsylvania horizon at the light-less 2.5-mile triangle track in Long Pond, Hamlin became the winningest active driver at Pocono and tied Jeff Gordon for the most all-time Cup wins at the track with six.

“I mean, six. I can’t put into any words how much it means to me,” Hamlin, who started off the season with a win in the Daytona 500.

The victory was also the series-leading fourth of the year for the Joe Gibbs Racing driver.

Credit, he said, goes to people who were several states away.

“This is work that happens in the shop,” Hamlin said. “Way beyond what happens on race day.”

In Saturday’s race, Stewart-Haas Racing’s Kevin Harvick held Hamlin off to get the win. On Sunday, the situation was reversed as it was Harvick who just could not track down Hamlin over the final laps and had to settle for second place.

“Hoping for no caution,” Hamlin said of being able to stay in front of Harvick over the final laps. “I knew we had the car and I just kind of maintained my gap there and didn’t want to make any mistakes like I did at Bristol and gave that one away.”

The margin of victory was just over 3 seconds.

Harvick said his Sunday car was actually better than his winning car on Saturday. But Hamlin’s team strategy to stay out long before taking his final pit stop made the difference.

“He (Hamlin) did the opposite of what we did,” Harvick said. “We didn’t want to get caught on a caution and wound up losing a little bit too much time in lapped traffic with all the cars that hadn’t pitted and he was out there running clean laps and waited right to the very end (to pit) and wound up in front of us.”

Kyle Busch’s disappointing season continued when, on Lap 76, the defending series champion who has gone winless so far this season tangled with Ryan Blaney. Busch spun and slammed the infield wall, ending his race.

“We’re in 2020 so it doesn’t surprise me to get crashed out,” Busch said on the Fox broadcast. “I don’t know what happened but it doesn’t make any sense to talk about it.”

Once again, bad weather forced a delay in the action. Lightning strikes near the track during the pace laps forced the race to start about 40-minutes later than scheduled. The cars went back on the track but after four laps, rain started. That led to a 50-minute red flag stoppage.

At about 6 p.m. Eastern, the cars headed back onto the track under yellow. At 6:15, the green flag restarted the race.