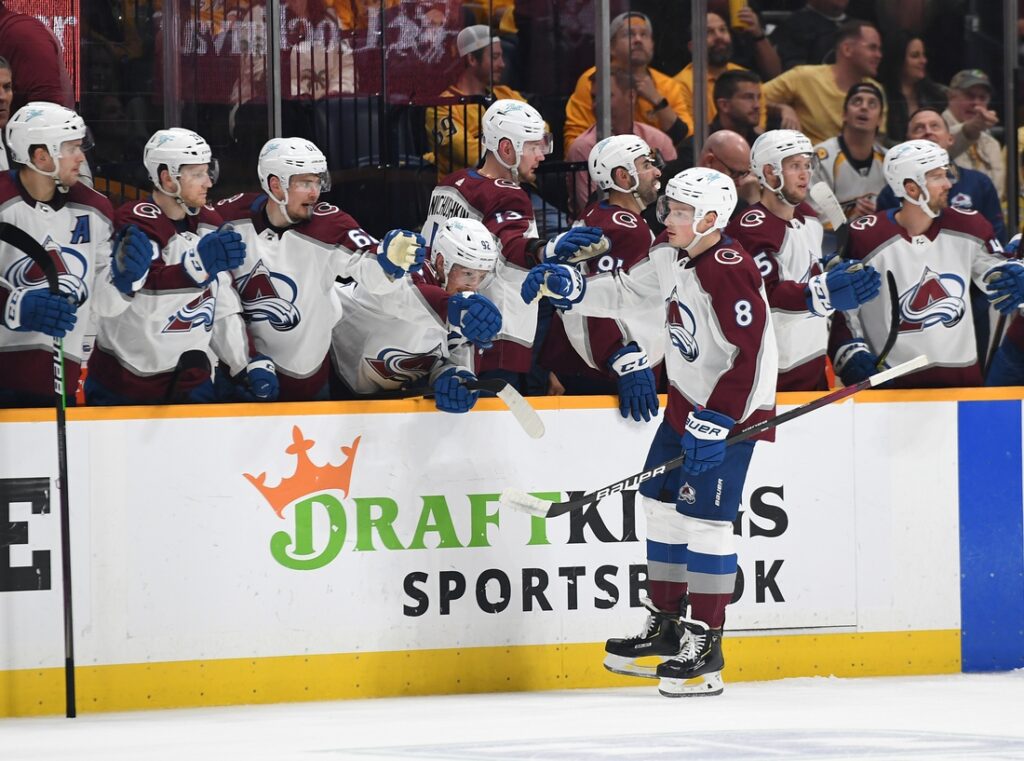 Cale Makar and Andre Burakovsky each had a goal and two assists Monday as the Colorado Avalanche completed a sweep of the Nashville Predators with a 5-3 road victory in Game 4 of their first-round playoff series.

The top overall seed in the Western Conference, Colorado became the first team to advance to the second round of this year’s playoffs. The Predators, meanwhile, suffered the first postseason sweep in franchise history.

The Predators took their first lead of the series on Filip Forsberg’s goal at 3:58 of the third period, but the advantage didn’t even last five minutes. After Devon Toews equalized for Colorado, Valeri Nichushkin scored the game-winner at 12:02 of the final frame.

Burakovsky assisted on both markers. The three points matched Burakovsky’s career high for a playoff game.

“We had to regroup kind of halfway through the third (period),” Avalanche captain Gabriel Landeskog said. “We got standing still too much. …

“Being down a goal halfway through that third and being a little bit flat through the third, we were able to crank it on and turn this thing around. Everybody’s contributed. It’s good to see, it’s a good sign going forward.”

Makar led all players with 10 points (three goals, seven assists) in the series, setting an NHL record for most points by a defenseman over the first four games in one postseason.

“Cale is Cale,” Landeskog said. “We’re getting spoiled watching that on the daily. So it’s very special, and obviously it’s a big one here, not to give them any life and have to go back to Denver and play Game 5.”

Nathan MacKinnon scored Colorado’s other goal, an empty-net power-play marker in the final minute. J.T. Compher had two assists for the Avalanche.

Colorado goalie Pavel Francouz stopped 28 of 31 shots. Francouz got the nod in place of regular starter Darcy Kuemper, who sustained an eye injury in Game 3.

Neither team took more than a one-goal lead until the final minute of the back-and-forth game, with Trenin twice capitalizing on Avalanche defensive miscues to equalize for the Predators in the first two periods.

Burakovsky gave Colorado the lead just 1:56 into the game, following an unusual delay. The forward’s wrist shot from the circle beat Predators goalie Connor Ingram but went through the netting, and play continued since the on-ice officials never signaled the goal. It took another minute of action before the next stoppage, and a video review then confirmed the score.

Predators captain Roman Josi said, “I think it was our best game (of the series). We played hard, I feel like we created a lot of chances. Got the lead in the third (period), and we’ve got to find a way to win it, and we didn’t. So it’s really disappointing right now.”

The Avalanche will next face the winner of the series between the Minnesota Wild and the St. Louis Blues. Game 5 of that 2-2 series is set for Tuesday night.