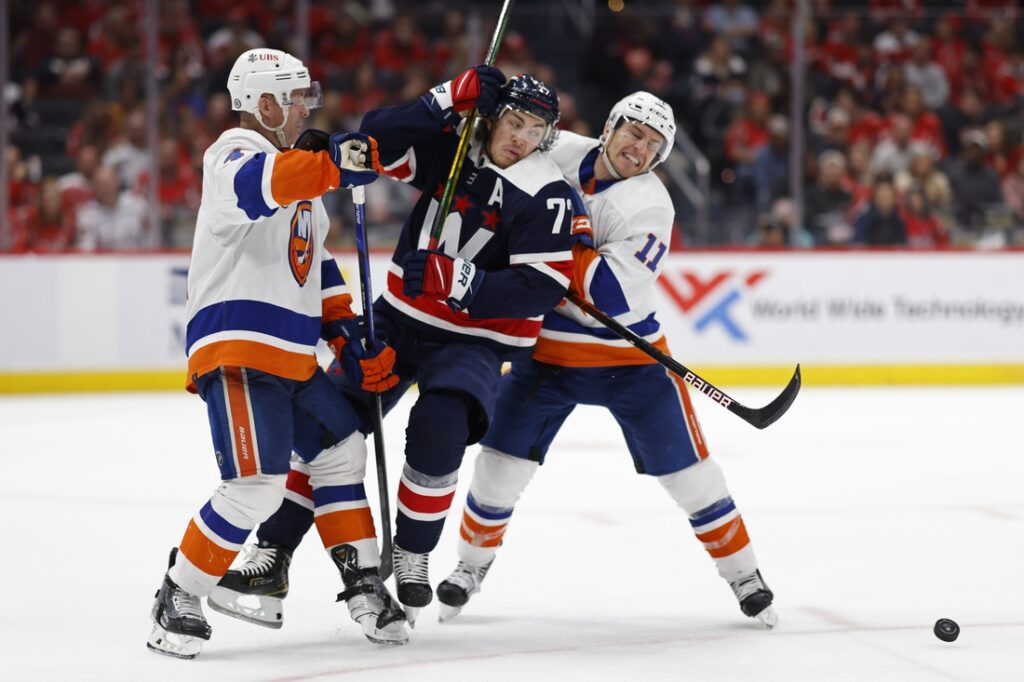 The New York Islanders are not going to participate in the Stanley Cup Playoffs next week, but they will try to once again make the Washington Capitals’ postseason path a little more difficult.

The host Islanders will look to sweep a home-and-home series from the Capitals on Thursday night, when the longtime Metropolitan Division rivals meet in Elmont, N.Y., in the penultimate game of the season for both teams.

The Islanders damaged the Capitals’ hopes of climbing out of a wild-card spot Tuesday night, when New York scored three unanswered third-period goals to earn a 4-1 win.

The loss was the second straight and third in four games for the Capitals (44-24-12, 100 points), who missed a chance to move past the Pittsburgh Penguins (101 points) into third place in the Metropolitan. The Penguins fell Tuesday to the Edmonton Oilers 5-1.

“We can’t play like we did tonight going into the playoffs,” Capitals head coach Peter Laviolette said. “This isn’t who we are. This isn’t our M.O. It’s one night, it was lousy and so that’s that.”

Win or lose on Thursday, the Capitals won’t know their playoff fate until Friday, when they visit the New York Rangers while the Penguins host the Columbus Blue Jackets.

The third-place finisher in the Metropolitan will face the second place Rangers in the first round. The fourth-place finisher will be relegated to the second wild card and draw the Florida Panthers, who enter Thursday with the most points in the NHL at 120.

The first wild card will be either the two-time defending Stanley Cup champion Tampa Bay Lightning or the Boston Bruins.

The Islanders (36-34-10, 82 points) grew accustomed to figuring out playoff machinations while qualifying for the postseason each of the previous three seasons. But New York, which fell to the Hurricanes in the second round in 2019 before being eliminated by the Lightning in the semifinals in 2020 and 2021, couldn’t recover from an 11-game losing streak amid a COVID-19 outbreak from Nov. 7-Dec. 5.

“It’s a position we didn’t think we would be in and we were in a position for a while there where we had to climb out of a decent-sized hole and go on quite a bit of a run,” Islanders captain Anders Lee said. “And you saw us for a stretch there kind of bring that together a little bit. And we did and we stuck together and obviously we came up plenty short. We want to do things the right way. We want to continue to build as a group and learn from everything that’s gone on this year.”