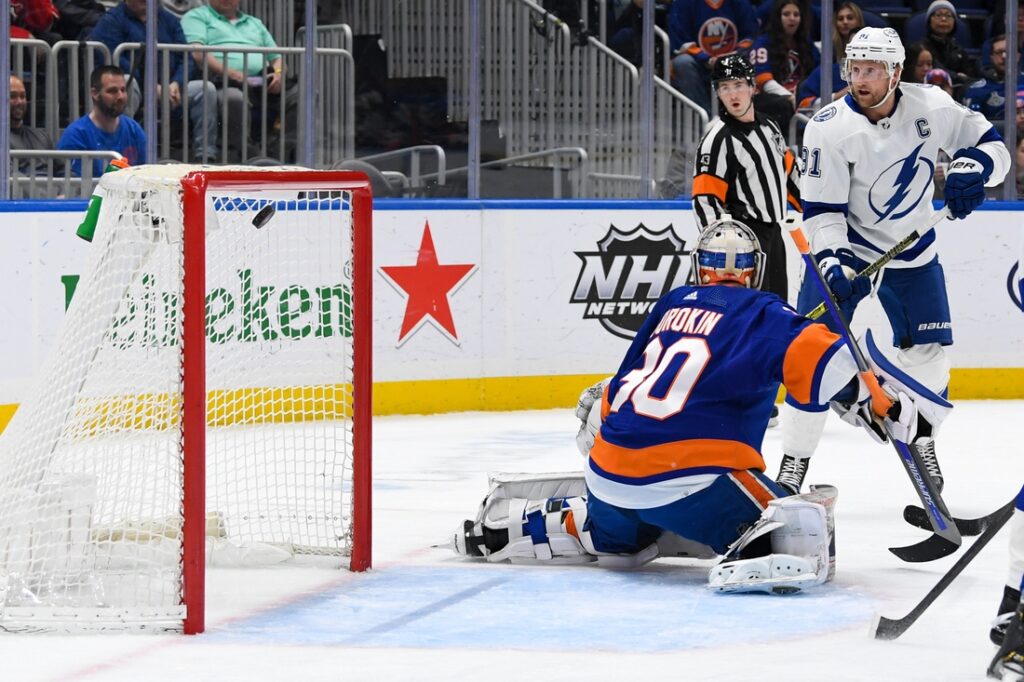 Captain Steven Stamkos recorded a hat trick to notch his franchise-record ninth straight multi-point performance, fueling the Tampa Bay Lightning to a 6-4 victory over the New York Islanders on Friday in Elmont, N.Y.

Tampa Bay officially clinched third place in the Atlantic Division after the Boston Bruins dropped a 5-2 decision to the Toronto Maple Leafs earlier on Friday. The Lightning will square off against the second-place Maple Leafs in an Eastern Conference first-round playoff series.

Stamkos scored in the first period to reach the 40-goal mark for the sixth time in his career. Ryan McDonagh, Corey Perry and Brandon Hagel also scored and Andrei Vasilevskiy made 33 saves to send the Lightning to their fifth win in the past six games.

Mike Hoffman, Brendan Gallagher, Mathieu Perreault, Jake Evans and Christian Dvorak each had a goal and an assist for the Canadiens, who fell to the bottom of the league standings after reaching last season’s Stanley Cup Final. Montreal’s Tyler Pitlick added a goal, and Carey Price made 37 saves. Only two Montreal skaters didn’t manage a goal or an assist.

Ben Chiarot logged a goal and an assist and Noel Acciari also scored for Florida. One night after the Panthers clinched the first Presidents’ Trophy in franchise history, they rested a litany of key players in anticipation of the playoffs.

Jack Eichel had two goals and an assist to lead Vegas past host St. Louis to end the first season in Golden Knights history that won’t include a trip to the playoffs.

The loss ensures that the Blues finished third in the Central Division. St. Louis will face the second-place Minnesota Wild in the first round of the Stanley Cup playoffs.

The Blues may have already been looking ahead to the postseason, as they were outshot by a 45-18 margin on Friday. The Golden Knights’ seven goals matched the most scores allowed by the Blues in any game this season.

Both teams rested several top players, especially the Bruins, who were playing on back-to-back nights after defeating the Buffalo Sabres on Thursday.

The Maple Leafs will play the Tampa Bay Lightning in the first round of the playoffs.The Bruins will play the Carolina Hurricanes. Toronto swept the three-game season series with Boston.

Casey Mittelstadt scored 2:07 into overtime to give Buffalo a victory over visiting Chicago in the regular-season finale for both teams.

Mittelstadt backhanded in a rebound of a Dylan Cozens shot over the left pad of Blackhawks’ goaltender Collin Delia for his sixth goal of the season.

Owen Power and Tage Thompson also scored goals and Dustin Tokarski finished with 19 saves for the Sabres, which won for the fifth time in its last six games and finished fifth in the Atlantic Division. Chicago had a two-game win streak snapped and finished seventh in the Central Division.

Devin Shore scored in the sixth round of the shootout to give Edmonton a victory over visiting Vancouver in the regular-season finale for both teams.

The Oilers, who already had clinched second place and home-ice advantage for their first-round Western Conference playoff matchup against the Los Angeles Kings, rested their two top scorers, Connor McDavid and Leon Draisaitl, as well as No. 1 goalie Mike Smith.

McDavid, who had 44 goals and 123 points, won his fourth Art Ross Trophy awarded to the NHL’s top scorer while Draisaitl finished second to Toronto’s Auston Matthews (60) in the goal-scoring race with 55 goals.

Connor Hellebuyck made 32 saves for the win, improving his career record against the Flames to 12-4-1. Blake Wheeler and Brenden Dillon also scored for the Jets, who go into their season finale on Sunday at home against the Seattle Kraken riding a three-game winning streak.

Matthew Tkachuk scored for the Pacific Division-champion Flames, who lost only twice in regulation in their last 14 games (10-2-2) of the regular season. Dan Vladar stopped a career-high 40 shots for a playoff-bound team that did not rest any regulars.

Pius Suter scored the go-ahead goal, Magnus Hellberg made 20 saves in his first NHL appearance in five years, and Detroit closed out its season with a win over host New Jersey.

Hellberg had not appeared in an NHL contest since April 9, 2017, as a member of the New York Rangers. Hellberg, 31, played the last five seasons in Russia.

Brady Tkachuk had one goal and one assist, Josh Norris and Travis Hamonic added one goal apiece and Ottawa defeated host Philadelphia the final regular-season game for both teams.

Tkachuk reached the 30-goal plateau for the first time in his career. Austin Watson added an empty-net goal and Thomas Chabot had three assists for the Senators, while goaltender Anton Forsberg made 32 saves.

Owen Tippett had one goal and one assist and James van Riemsdyk contributed one goal for the Flyers. Ivan Provorov chipped in with two assists, and Flyers goaltender Martin Jones stopped 32 shots.

Dryden Hunt scored the tiebreaking goal with 13:18 remaining in the third period and host New York recorded a victory over Washington in the regular-season finale for both teams.

The Rangers will start the postseason against the Pittsburgh Penguins, who defeated Columbus Blue Jackets and secured a third-place finish in the Metropolitan Division. The Capitals finished in the second wild-card spot in the Eastern Conference and will open the postseason next week against the Florida Panthers.

Hunt snapped a 2-2 tie when he got a pass from Kaapo Kakko and made a slick move to go from his forehand to his backhand. He skated to the goal line and when Washington goalie Ilya Samsonov got out of position, Hunt tucked the puck into the vacated left side of the net.

Marcus Pettersson had a goal and two assists to lead Pittsburgh to a win over visiting Columbus, clinching third place in the Metropolitan Division in the regular-season finale for both teams.

Evgeni Malkin and Brian Boyle each added a goal and an assist, Evan Rodrigues and Kris Letang also scored and Teddy Blueger had two assists for the Penguins, who scored three times in the first 6 1/2 minutes and locked up a meeting with the New York Rangers to open the playoffs.

Justin Danforth, Oliver Bjorkstrand and Gustav Nyquist scored, and Jakub Voracek had two assists for the Blue Jackets, who lost 14 of their last 19.

Jason Robertson’s team-leading 41st goal broke a tie midway through the third period against Anaheim’s emergency goaltender, and host Dallas earned some momentum for the playoffs by concluding the regular season with a victory.

Max Comtois and Troy Terry scored for the Ducks, who missed the playoffs for the fourth straight season. Starting goalie John Gibson left due to an upper-body injury after stopping all five shots in the first period, and Anthony Stolarz, who saved eight of 10 shots, endured a lower-body issue during the second. Tom Hodges stopped two of three shots in his NHL debut.

Tyson Jost also scored and Marc-Andre Fleury had 27 saves for Minnesota, which set a franchise record for points (113) and victories (55) in a season.

With the win, the Wild finished second in the Central Division and will have home-ice advantage against St. Louis in their first-round series. The Blues won all three games between the teams this season. Nazem Kadri had a goal and Pavel Francouz stopped 18 shots for the Avalanche, who finished the season 1-5-1 in their last seven games.

Chris Driedger made 24 saves for his first shutout of the season as Seattle won the final home game of its inaugural campaign, defeating San Jose.

Yanni Gourde, Adam Larsson and Victor Rask scored for the Kraken, who snapped a four-game losing streak. Seattle has one contest remaining in the regular season, a makeup game Sunday at Winnipeg after an April 13 game was postponed because of a Manitoba snowstorm.

San Jose, which took a 5-4 overtime defeat Thursday in Edmonton before traveling to Seattle, finished its season with three consecutive defeats (0-2-1).

Gostisbehere scored his second goal at 10:27 of the third period to give the Coyotes a 5-4 lead. Travis Boyd, Jack McBain and Michael Carcone also scored for the Coyotes, who are moving about 20 miles away to a smaller arena on the campus of Arizona State University next season.

Karel Vejmelka was pulled after allowing four goals on six shots against Nashville. Harri Sateri took over and stopped all 27 shots for Arizona. The Predators will play the Colorado Avalanche in the first round of the Stanley Cup Playoffs.