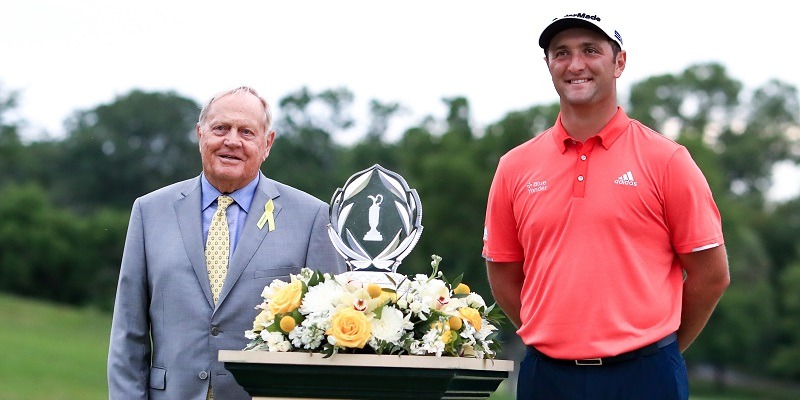 Jon Rahm shot a 3-over 75 on Sunday to win the Memorial Tournament at Dublin, Ohio by three strokes over Ryan Palmer to join legendary Seve Ballesteros as the lone Spanish golfers to earn the World’s No. 1 ranking.

Rahm, who finished at 9-under 279, surpassed Rory McIlroy for the top spot with his victory, the fourth of his career on the PGA Tour. He had three birdies, two bogeys and one double bogey in the final round at Muirfield Village Golf Club.

Rahm becomes the fifth youngest player to reach No. 1 in the world at 25 years, 251 days.

McIlroy of Northern Ireland shot 6-over 78 in the rainy conditions and finished in a tie for 32nd at 4 over. He had two birdies and five bogeys and also had a disastrous triple-bogey on the par-5, 5th hole as he fell out of the top spot.

Palmer, who shot 74, finished at 6-under 282. He had one birdie and three bogeys for his 10th career runner-up finish.

Legendary golfer Jack Nicklaus, who founded the tournament, was waiting to exchange fist bumps with Rahm and congratulate him on the win and No. 1 ranking. Nicklaus revealed during a 49-minute rain delay on Sunday that he and wife Barbara battled the coronavirus earlier this year.

“Jon Rahm played beautifully,” Nicklaus said in a PGA transcript. “He leaked a little oil at the start of the back nine, but he played so well, so much better than anybody else was this week. … I’m very happy for him. I think he’s a great winner.”

Rahm was assessed a two-shot penalty after the round for causing the ball to slightly move before he chipped a shot into the hole on 16.

Rahm appeared to be sailing to the victory when he held an eight-shot lead with nine holes to play.

Rahm regained momentum when he scored what appeared to be a birdie on 16 with an incredible chip from the rough beyond the green. His chip looped into the air and took a bounce and then rolled directly into the hole. It was later rescinded due to the ball movement so he officially carded a bogey on the hole.

“Luckily, I pulled off the best short game shot I’ll ever have,” Rahm told CBS before the penalty was assessed. “I hit a couple good ones this week but that was unbelievable.”

After later getting a chance to view the infraction via slow-motion replays, Rahm didn’t dispute the penalty.

“I want everybody to hear it: It did move. It is a penalty,” Rahm told reporters. “As hard it is to say for how great of a shot it was — as hard as it is to say that, I won’t finish double digits under par. But it did move, so I’ll accept the penalty, and it still doesn’t change the outcome of the tournament. So I’m going to stay with that.”

Still, there was no late push from Palmer, who went par-bogey over the final two holes.

“I just didn’t quite have it swing-wise,” Palmer said of his round. “I hit some shots I normally wouldn’t hit, I think just a little lazy.”

England’s Matthew Fitzpatrick finished third with a 5-under 283. Fitzpatrick had five birdies and one bogey while shooting a round-best 68.

“I think I hit 11 fairways for the day, so that just allowed me to control the ball into the greens,” Fitzpatrick said after his strong round. “The fact that it’s playing so firm, you’ve really got to pick your spots, pick your targets. I’d say aggressive to conservative targets, and yeah, I think we sort of did that really well.”

Australia’s Jason Day (73 on Sunday) and England’s Matt Wallace (72) finished tied for fourth at 4 under. Canada’s Mackenzie Hughes (72) and Sweden’s Henrik Norlander (74) tied for sixth at 3-under 285.

Tony Finau, who held the lead past the midway point of the third round, struggled with a 78 to finish eighth at 2 under. Kevin Na (73) placed ninth at 1 under.

Tiger Woods shot 4-over 76 on Sunday and finished in a tie for 40th place in his first tournament since mid-February. Woods had a 6-over 294 total.

His last trip around the course wasn’t very smooth. Woods, who has won the Memorial five times, did have three birdies but also carded five bogeys and one double bogey.

“Well, I completed and played again,” Woods said. “It’s been a while. It was nice to get my feet wet and compete and play again. Tough, tough conditions to start out my first week back, Thursday and Sunday. But it was good to get the feel and the flow of competing again.”

Collin Morikawa, who won last week’s Workday Charity Open on this same course, struggled with a 77 and finished in a tie for 48th place at 8 over.

Phil Mickelson ended the tourney at 9 over after a final-round 78.

Brooks Koepka shot an 8-over 80 to finish at 12-over 300. Koepka had two birdies, eight bogeys and one double bogey on Sunday.