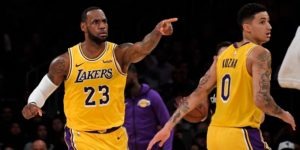 Los Angeles Lakers star LeBron James told reporters Tuesday he believes his comments on Monday — regarding a tweet by Houston Rockets general manager Daryl Morey in favor of an independent Hong Kong — were taken out of context, calling the circumstances as a whole “tough.”

“I mean obviously it’s a tough situation that we’re all in right now, as an association,” said James, who added that he often feels that his words are taken out of context. “Us as athletes, owners, GMs, whatever, so forth. I think when the issue comes up, if you feel passionate about it or you feel like it’s something that you want to talk about, then so be it.”

James said Monday — after the Lakers returned from a tour in China — he believed Morey was “either misinformed or not really educated on the situation” and didn’t consider the consequences before posting his tweet.

“So many people could have been harmed not only financially, physically, emotionally, spiritually,” James said Monday. “So just be careful what we tweet and say and we do, even though, yes, we do have freedom of speech, but there can be a lot of negative that comes with that, too.”

After backlash to James’ comments, he tweeted a follow up on Monday night, writing, “Let me clear up the confusion. I do not believe there was any consideration for the consequences and ramifications of (Morey’s) tweet. I’m not discussing the substance. Others can talk About that.”

James’ Monday comments and tweets drew plenty of criticism, including from many in Hong Kong, where protestors were seen stomping on and burning his jerseys on basketball courts in the city. Speaking from the Lakers’ facility Tuesday, James said he hadn’t see those images and wasn’t monitoring the backlash.

“I haven’t been paying attention to it much besides what I said and what we’re trying to do here,” he said.

James elaborated somewhat on the discussion about free speech Tuesday.

“I also don’t think that every issue should be everybody’s problem, as well,” James said. “There’s multiple things that we haven’t talked about that happen in our own country that we don’t bring up. There’s things that happen in my own community. …

“There’s issues all over the world, and I think the best thing we can do is, if you feel passionate about it, talk about it. If you don’t have a lot of knowledge about it or you don’t quite understand it, I don’t think you should talk about it. I think it just puts you in a tough position.”

James finished his media session by saying he won’t discuss the subject moving forward, with hopes of avoiding distractions around the team.

“I won’t talk about it again, because I’ll be cheating my teammates by continuing to harp on something that won’t benefit us,” James said.

Morey has not been disciplined for his since-deleted tweet that included a logo and the words, “Fight for freedom, stand with Hong Kong.” Rockets owner Tilman Fertitta spoke out against Morey and his tweet, and Rockets star James Harden said afterward, “We apologize. You know, we love China. We love playing there,” while standing next to teammate Russell Westbrook in Tokyo.

According to an ESPN report Monday, players asked NBA commissioner Adam Silver whether Morey would face any ramifications from the league, with several arguing the point that if a player did or said something that cost the league millions, that player would face repercussions.

In the days following Morey’s tweet, Chinese state television decided to not air the Brooklyn Nets-Lakers preseason games played in China, and numerous Chinese companies suspended business with the NBA.

Hong Kong, a semi-autonomous region in China, is in the midst of months-long protests — sometimes violent — with Beijing sensitive to foreign influence on the unrest.