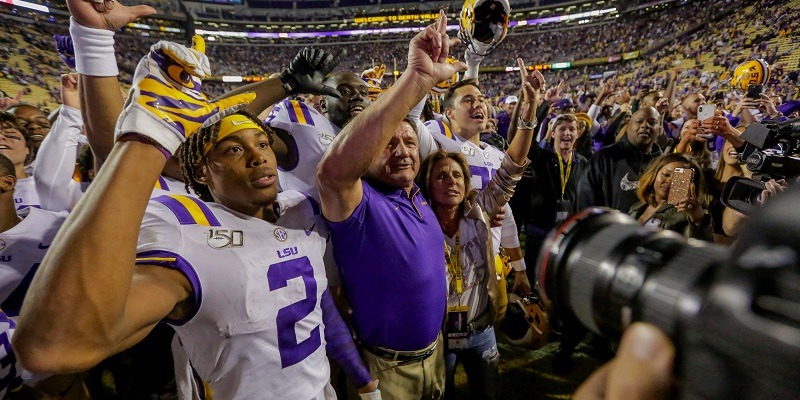 LSU vaulted to No. 2 in the Associated Press Top 25 poll behind Alabama to give the SEC the top two teams in the rankings released on Sunday.

The Tigers moved up from No. 5 due to a 42-28 victory over then-No. 7 Florida on Saturday. LSU leapfrogged Clemson and Ohio State, who are ranked No. 3 and No. 4, respectively.

Georgia tumbled from third to 10th due to a 20-17 double-overtime loss to unranked South Carolina.

Texas dropped four spots to No. 15 after falling 34-27 to Oklahoma.

Michigan is 16th, followed by Arizona State. The unbeaten trio of Baylor, SMU and Minnesota completes the top 20.

Cincinnati is 21st with Missouri next. Iowa dropped six spots to No. 23 after losing to Penn State.

Undefeated Appalachian State is No. 24 and ranked for only the second time. The other occasion was for one week last year, when the Mountaineers reached No. 25 before losing to Georgia Southern on Oct. 25.

Washington returned to the ranking at No. 25. Minnesota and Missouri also are newcomers this week.

Wake Forest falling out leaves the Atlantic Coast Conference with just one ranked team for the first time since Sept. 2014.