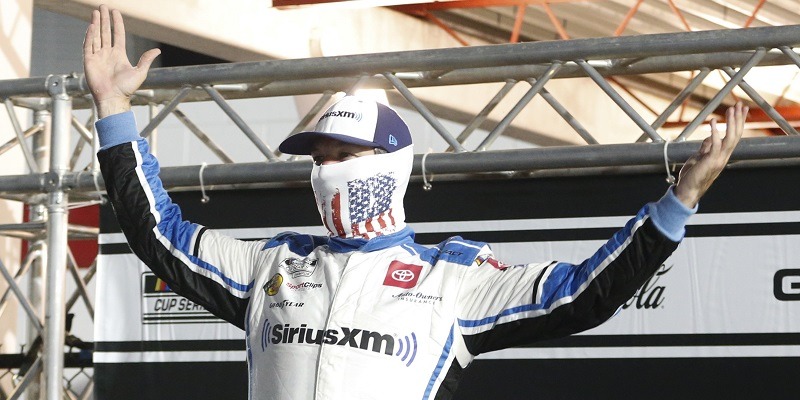 Martin Truex Jr. threw another shovel of dirt on his one-time reputation as a short-track also-ran on Wednesday night as he came on strong in the late going and won the Blu-Emu Maximum Pain Relief 500 at the .526-mile Martinsville (Va.) Speedway.

The victory was Truex’s first of the season.

“A big day for us,” he said. “We did what we had to do. Nice to get a win early in the season, and now hopefully we can get on a roll.”

Truex, the 2017 NASCAR Cup Series champion, took the lead for the first time in race on Lap 370 and led the rest of the way to get the 27th win of his career.

The Joe Gibbs Racing driver prevailed even though he received a pit-road penalty early in the race and also had to have some front bodywork cut away.

“Went a lap down in the first 60 laps,” Blaney said. “Luckily we got the car a lot better in the first stop and got the lucky dog and drove up through there. Ran second in the second stage. We just need a breakthrough. Hopefully that will be soon.”

In Truex’s first 80 starts at tracks that measure less than a mile around, he had zero victories and his average finish was 19th. In his last six starts at the shorties, he has won four times. Two of those four victories have been at Martinsville, where he triumphed last October.

“We’ve been working a long time trying to figure this place out,” Truex said. “Just chipping away at it. The last couple years, we’ve been really strong.”

The race was the first on a Wednesday night at Martinsville. It was the Cup Series’ seventh event since a two-plus-month, coronavirus-forced hiatus, and it was the 11th of the season. The race was run without fans in the grandstands because of the pandemic.

For a good hour or so, it looked as though Jimmie Johnson’s 105-race winless streak would come to an end. Johnson, a seven-time series champion whose last victory came in 2017, took the lead on Lap 202. He held it for the rest of the 130-lap second stage. But early in the third and final stage — on Lap 273 — Johnson was passed by Blaney, and he never really threatened again.

Johnson, who drives for Hendrick Motorsports, led more laps on Wednesday (70) than in the other 10 races of the season combined but finished 10th.