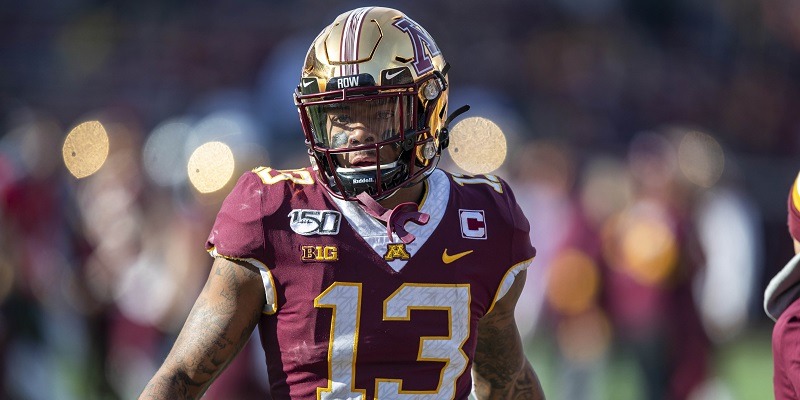 Rashod Bateman, a potential first-round pick in the 2021 NFL Draft, will not return to the Minnesota Golden Gophers, he announced Tuesday.

In a video posted to Twitter, Bateman said the decision to opt out of the season to prepare for the draft was one of the “hardest decisions I’ve ever had to make in my life” and that he wished he could return to play for a Big Ten championship in 2020.

“In light of the uncertainty around health and safety in the midst of the COVID-19 pandemic, I have to set my wishes aside for the wellness of my family, community and beyond,” he said. “Because of this, I have decided to opt out of the 2020 college football season and I will be taking the next steps in my journey by declaring for the 2021 NFL Draft.”

He was a third-team Associated Press All-American selection and also was named the Big Ten’s top receiver in 2019.

Bateman follows Virginia Tech cornerback Caleb Farley in opting out of the college football season and he does so with the support of coach P.J. Fleck.

“This morning, Rashod informed the team that he and his family made the decision to forgo his remaining eligibility and focus on training for the 2021 NFL Draft,” Fleck wrote on Twitter. “Rashod played a pivotal role in helping mold the University of Minnesota into an elite Big Ten program. He was a joy to coach and has developed into an NFL caliber of player. We could not be more proud of Rashod’s historic and All-American career at Minnesota.”

In just two seasons with the Golden Gophers, Bateman had 111 receptions for 1,923 yards and 17 touchdowns. His 704 yards set a Minnesota receiving record in his freshman season in 2018, and he also set the sophomore record last season with 1,219.

The loss of Bateman is a big blow to the Gophers, who finished 11-2 in a breakout season in 2019. They also lost wide receiver Tyler Johnson, who caught 86 passes last season. He was selected by the Tampa Bay Buccaneers in the fifth round of the draft in April.