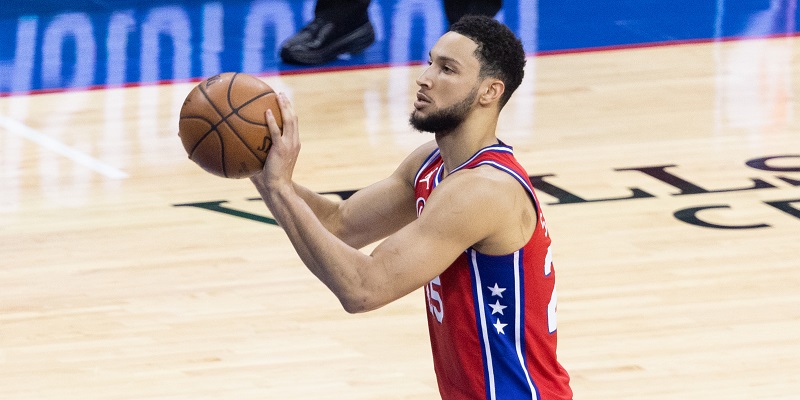 Incremental progress toward a reunion between Ben Simmons and the Philadelphia 76ers continued on Tuesday with a meeting between the All-Star and the franchise’s decision-makers, ESPN reported.

Simmons passed his entry physical, per reports, but his immediate future and long-term status with the 76ers remain cloudy due to his demand for a trade and “surprise” decision to report to the team on Monday.

ESPN reported Simmons met with team president Daryl Morey and general manager Elton Brand in what was described as a “brief” meeting Tuesday night. Simmons is in the NBA’s health and safety protocol and took his initial COVID-19 test on Monday, when he arrived at the arena before the Brooklyn Nets played the 76ers in a preseason game.

Head coach Doc Rivers reportedly met twice with Simmons on Tuesday and is not against the idea of him playing immediately.

Simmons, 25, could return by Friday, when the 76ers play the Detroit Pistons. Whether the team will permit Rivers to play him without measuring his fitness in practices is uncertain.

Rivers, who recalled his own holdout as a player, said he expects Simmons to be welcomed back when he’s ready to play.

“Players don’t get involved with people’s business,” Rivers said. “… I’ve been a player and this has happened before, and I was a player that has done it before. Other than those first 10 minutes of welcoming back and taking the crap from your teammates about missing camp and stuff, guys want to win. They do. I’m telling you, especially if you’re on that type of team where you have a chance to win … they look at Ben as a guy that can help them do that.”

Fellow All-Star Joel Embiid has been transparent with his emotions during Simmons’ time away. Embiid last week said the holdout was “borderline disrespectful” to the players who reported to training camp and preseason.

Embiid also helped spark the drama with comments last spring immediately after the 76ers were eliminated from the playoffs when he said, “Man, I will be honest. I thought the turning point was, you know, when we, I don’t know how to say it, but I thought the turning point was just we had an open shot and we made one free throw and we missed the other and they came down and scored.”

The open shot reference was to Simmons passing up what appeared to be a sure dunk at the rim, finding a cutting Matisse Thybulle instead. Thybulle was fouled and made one of two free throws. The Atlanta Hawks scored the next five points to close out the series.

The thorny commentary from Embiid and Rivers, who indicated after the same game he couldn’t answer whether Simmons was capable of leading the team to the title, prompted Simmons reportedly to tell the team he’d never play for the 76ers again.

“I think there’s going to be some adjustments, but it doesn’t need to be awkward,” Embiid said of Simmons rejoining the roster and ending a contentious holdout. “We’re all professionals. We want to win. He gives me the best chance to win. … We’re going to be fine.”

The Sixers reportedly worked feverishly to find a trade partner but Morey is said to be seeking an All-Star player in return.