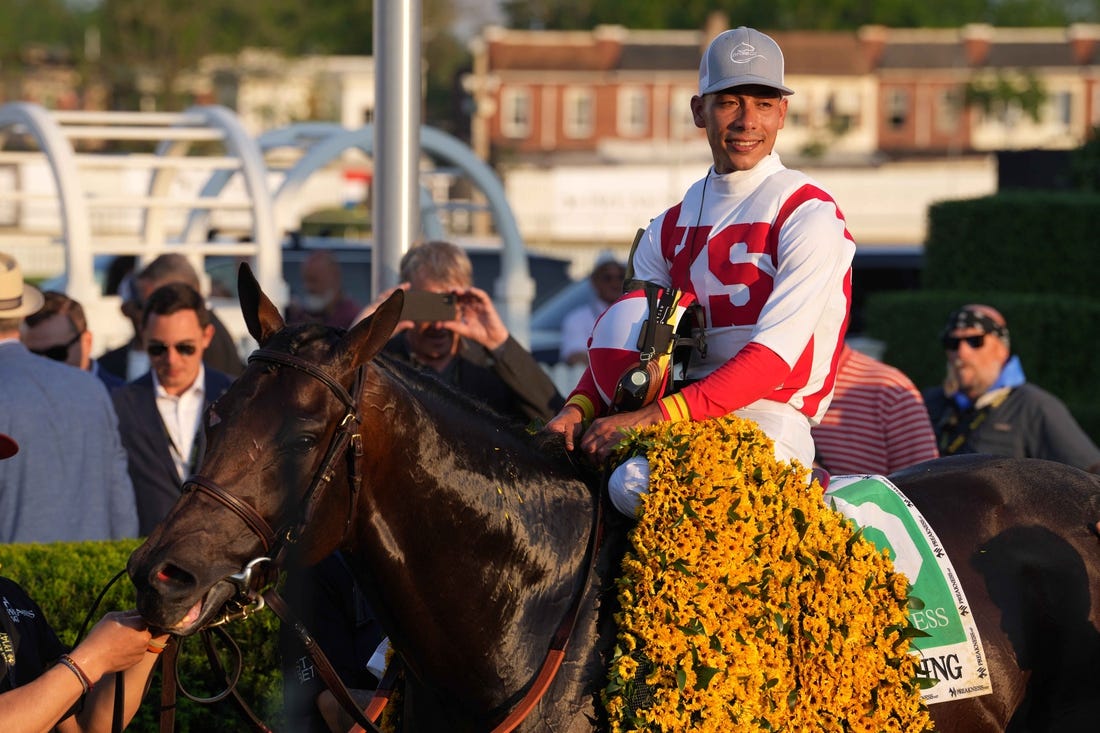 Chad Brown and Seth Klarman stuck to their guns on Early Voting, their precocious 3-year-old, and their strategy paid off when the colt captured the 147th Preakness Stakes on Saturday at venerable Pimlico Race Course in steamy Baltimore.

Early Voting went to the front at the head of the stretch and outlasted race favorite Epicenter by 1 1/4 lengths.

Early Voting is trained by Brown and owned by Klarman and went off as the 5-1 third choice in the race behind Epicenter and the filly Secret Oath.

Jose Ortiz rode the winner, which covered the 1 3/16-mile race in a time of 1:54.54 on a fast track. It’s the first Preakness victory for Ortiz, who won the 2017 Eclipse Award for the nation’s top thoroughbred jockey.

Early Voting was pressing second though the first 3/4 of the race behind a moderate pace set by Armagnac. Early Voting took charge as the horses turned for home as Armagnac faded. Epicenter rallied from the back of the pack on the inside and Secret Oath wheeled to the outside to find room to chase Early Voting.

Early Voting tired in the deep stretch and veered toward the rail but was too far clear of Epicenter to affect the latter’s run to the wire.

Early Voting’s connections opted to skip the Kentucky Derby and point their horse to the Preakness. Klarman grew up just a few blocks from Pimlico, and it was his 65th birthday, setting off a wild celebration.

“Chad and Seth deserve all the credit,” Ortiz said afterward. “They had enough points to run in the Derby, and it’s very hard to get owners to pass on that race. They did right by the horse — I don’t think Early Voting was seasoned enough to run in a 20-horse field. They proved that they were right today.”

Early Voting followed the pattern set by Brown and Klarman five years ago when Cloud Computing won the Preakness after not running in the Kentucky Derby. There has been plenty of debate about whether horses that don’t race in the Run for the Roses should be allowed to compete against those that went through that gauntlet.

“We had a similar game plan to that coming in here, and Jose executed it beautifully,” Brown said. “Honestly, I was never worried. Once we had a good target, I actually preferred (the pace). “It’s such a memorable win for Seth as our second Preakness. it’s just beautiful when a plan comes together.”

The Preakness was just the fourth race for Early Voting, who won the Grade 3 Withers Stakes on Feb. 22 at Aqueduct Racetrack in New York in just his second start. He then finished a close runner-up in the Grade 2 Wood Memorial, also at Aqueduct.

“Winning the Preakness once was like the dream of a lifetime and winning twice is beyond belief,” Klarman said. “It’s an extraordinary experience — give all the credit to Chad for getting the horse here and ready to run a big race and of course to Jose, who rode a masterful race.”

Brown has won the Eclipse Award for training four times, most recently in 2019.

Kentucky Derby longshot winner Rich Strike did not run in the Preakness, the middle jewel of the Triple Crown for thoroughbred 3-year-old horses.

His connections opted to wait to bring him back to competition in the Belmont Stakes on June 11 in New York. Rich Strike’s absence assured that there would not be a Triple Crown for the 42nd time in the past 44 years.

Brown and Klarman both said it’s unlikely that Early Voting would run in the Belmont Stakes, as the 1 1/2-mile distance of that race would likely be too long for their horse.