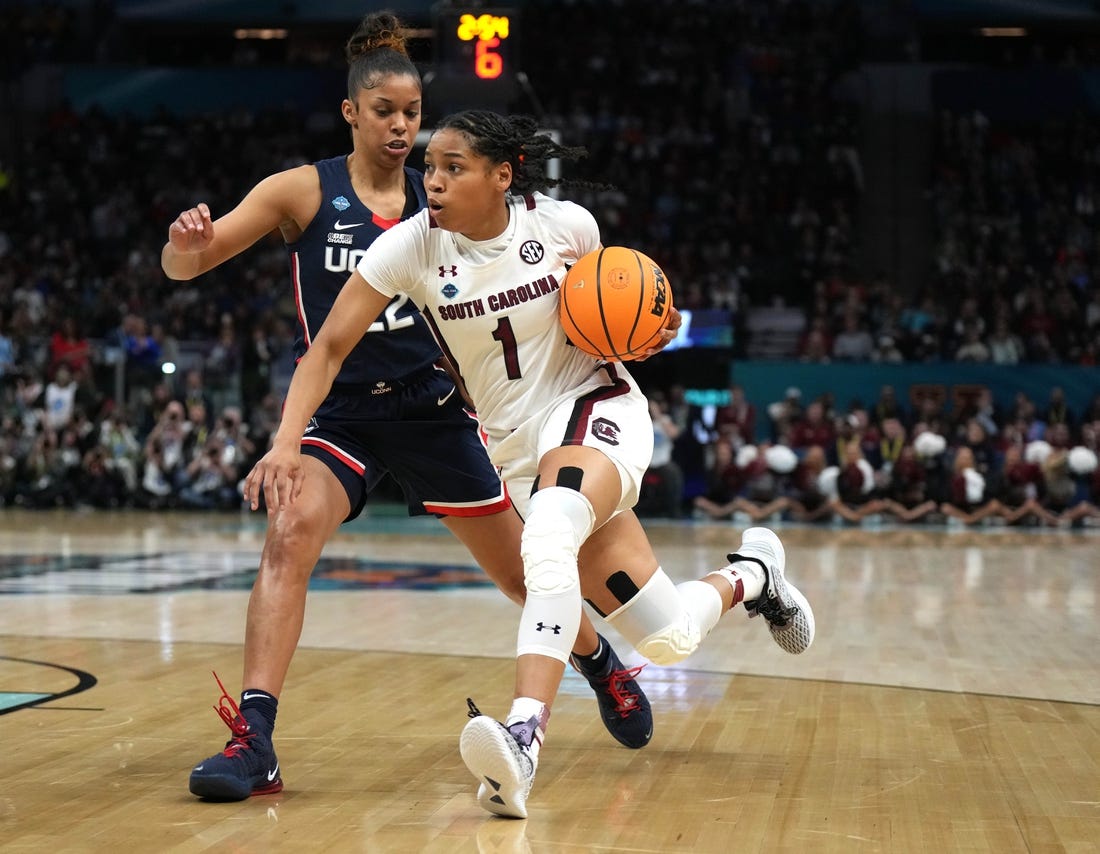 MINNEAPOLIS — The South Carolina Gamecocks ended the season the same way they started it — as the best team in the country.

“UConn is not only a great team, they’re a great tradition,” South Carolina coach Dawn Staley said. “They’re a part of our women’s basketball history; that you can’t really take away from them.”

South Carolina (35-2) also won in its only other NCAA title-game appearance, in 2017 under Staley. The Gamecocks lost in the semifinals last season to eventual champion Stanford, 66-65.

UConn (30-6), appearing in its 14th consecutive Final Four, was bidding for its first title since 2016, which capped a streak of four straight championships.

“We weren’t going to be denied,” Staley said. “We were going to play every possession like it was our last possession. I know our players are super exhausted, but they were determined to be champions today.”

Henderson scored eight points in an 11-2 run that put the Gamecocks in front 57-41 with 4:18 remaining. The senior guard hit 9 of 20 shots from the field, including 3 of 6 from beyond the arc, and had four assists.

“My teammates trusted in me,” Henderson said. “I feel like since day one, we’ve been putting in the hard work and waiting for this moment, and tonight just found open shots.”

Boston, the consensus player of the year, led South Carolina to a commanding 49-24 rebound advantage with her 30th double-double of the season. The Gamecocks’ average rebound margin of 17.5 per game was tops in the country.

“We knew that we’ve been dominant on the glass all season, and we couldn’t change up, especially for this game,” Boston said. “We knew it would come down to rebounding.”

The 25-rebound difference was the second-largest in championship game history, behind Old Dominion’s 57-30 edge over Georgia in the 1985 title game.

“We knew tonight that if we didn’t hold our own on the boards, that it was going to be a really bad night for us,” UConn coach Geno Auriemma said. “And that’s exactly what happened.”

Paige Bueckers, a high school star at nearby Hopkins, Minn., had 14 points for UConn. Bueckers, the player of the year last season as a freshman, hit 6 of 13 shots and had a team-high six rebounds. She missed 19 games this season with a knee injury.

“I’m obviously upset, just with the way things ended,” Bueckers said. “Super proud of this team for how far we’ve come and all the adversity we’ve dealt with, and all that we’ve overcome to get to this point. But at UConn, it’s national championship or nothing. So obviously upset, frustrated, disappointed.”

South Carolina led by 18 early in the second quarter but saw UConn rally within 35-27 at the half. The Gamecocks opened the third quarter with an 8-0 run to push the lead to 43-27.

Caroline Ducharme and Evina Westbrook hit back-to-back 3-pointers to cap a 10-point run that cut the lead to 43-37. The Gamecocks led 46-37 entering the final period.

South Carolina led 22-8 after one quarter and stretched it to 30-12 on Henderson’s 3-pointer. Bueckers, who missed her only shot in the first period, scored nine points in the second quarter.

South Carolina had a 25-13 edge on the glass in the first half, including 16 offensive rebounds for a 17-2 advantage in second-chance points.

The Gamecocks dominated inside immediately, opening an 11-2 lead behind seven second-chance points.

South Carolina hit 10 of 20 shots in the opening period, along with a 12-3 edge on the boards. The Gamecocks also forced five turnovers while committing none.

“The first five minutes, I thought they set the tone right then and there for how the game was going to be played,” Auriemma said. “We were pretty much even the rest of the time.

South Carolina, which also defeated UConn 73-57 in November, lost its two games this season by a combined three points.