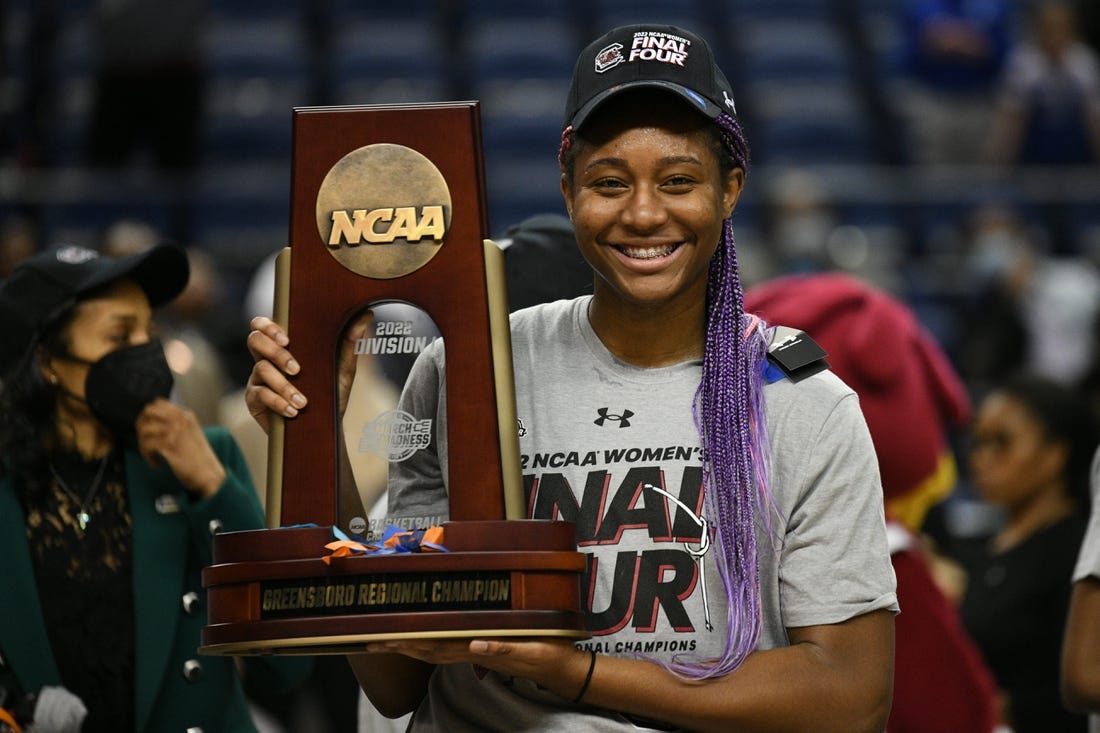 Aliyah Boston scored 19 points and helped South Carolina patrol the lane in an 80-50 romp past Creighton and into another Final Four on Sunday night at Greensboro, N.C.

Destanni Henderson and Brea Beal both scored 12 points as the Gamecocks had a smooth time in the final of the Greensboro Region.

The top-seeded Gamecocks (33-2) became the first team to reserve a spot in the tournament’s Final Four, reaching this point for the fourth time in the last seven tournaments. They’ll meet either Louisville or Michigan in Friday night’s national semifinals in Minneapolis.

South Carolina grabbed full control with a dominant second quarter and the outcome never was in much doubt from there.

Lauren Jensen posted 12 points and reserves Morgan Maly and Rachael Saunders ended up with eight points each for 10th-seeded Creighton (23-10), which upset Colorado, Iowa and Iowa State to make a tournament run.

The Bluejays had never advanced past the second round in any previous NCAA appearances.

Boston, who pulled in seven rebounds, shot 7 for 9 from the field, part of South Carolina’s 50.9 percent shooting.

South Carolina built a 46-25 halftime lead by shooting 60 percent from the field and a 20-9 rebounding advantage.

Creighton, which relied heavily on 3-point shooting during the season, attempted only seven treys in the first half, making three. The Bluejays did rack up 10 assists on their 11 baskets from the field.

The Gamecocks, playing in front of an overwhelmingly partisan crowd less than a 3 1/2-hour drive from their campus, shot 10 for 17 from the field in the first quarter to build a 23-16 lead.

South Carolina then outscored Creighton 9-2 in the opening four minutes of the second quarter for a double-digit advantage. Soon, the gap grew to 44-20.

Creighton became just the second No. 10 regional seed to advance to the Elite Eight in the women’s tournament.

Iowa will try to get back on the winning track when it hosts Georgia Tech as part of the 24th Atlantic Coast Conference-Big Ten Challenge on Tuesday in Iowa City,…

The streaking Vancouver Canucks will look for their sixth win in seven games when they host the Washington Capitals Tuesday night. The Canucks will be playing their third game in…