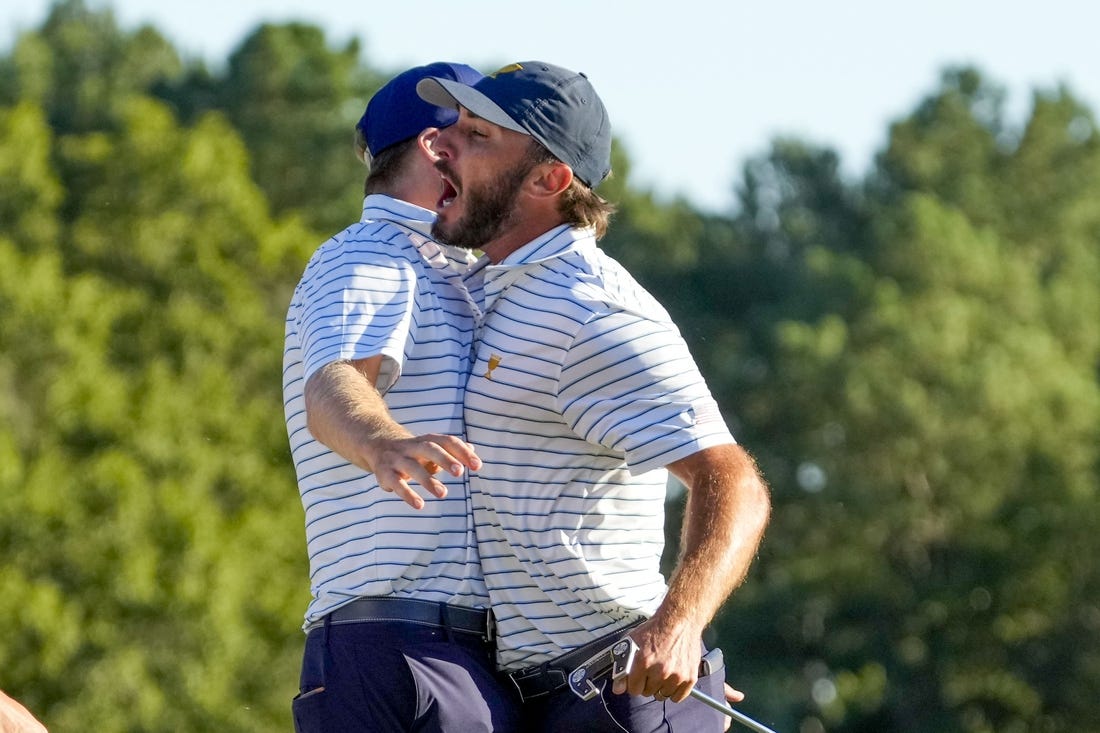 Max Homa birdied the final two holes of the last match of the day Friday to deliver the U.S. team to an 8-2 advantage over the International team after two days of the Presidents Cup at Quail Hollow Club in Charlotte.

Homa and Billy Horschel defeated Canadian tandem Corey Conners and Taylor Pendrith 1 up in a four-ball (best-ball) match. The match was all square through 16 holes, but Homa rolled in a 13-foot birdie putt at No. 17 to take the lead.

After Pendrith made a birdie putt at No. 18, Homa responded with an 11-footer to halve the hole — and win the match. So sure of the putt’s fate, he took a step away to begin celebrating moments before it dropped, and his American teammates soon joined him and Horschel.

“It’s pretty surreal to have 10 of the best golfers I’ve ever seen in my life watching you and you’ve gotta help them,” Homa said on the Golf Channel broadcast. “It’s a heavy weight but it’s also really fun. It’s something we live for.”

Homa came straight to the Presidents Cup after winning last week’s PGA Tour stop, the Fortinet Championship, in a tight Sunday finish to defend his 2021 title there.

“He described to me this morning at breakfast his whole Sunday round at Fortinet, and what he told me impressed me so much that I’m going to have him tell the whole story all over again to my son so I can hear it again,” U.S. captain Davis Love III said. “Every time he needed to make a putt, he made the putt. That’s what he did last week and last year in Napa. He’s a strong player. But he plays with a lot of passion.”

After sleeping on a 4-1 lead, the Americans won four of the five available points once again. The pairings of Jordan Spieth/Justin Thomas and Patrick Cantlay/Xander Schauffele stayed together and won their matches for the second straight day. The other two matches were tied, allowing the International team to pick up two half-points.

Spieth and Thomas defeated Australians Adam Scott and Cam Davis 2 and 1. Cantlay and Schauffele raced out to a 5-up lead through eight holes before winning 3 and 2.

Sam Burns holed an eagle putt at the par-5 seventh that measured a hair shy of 80 feet, helping himself and Scottie Scheffler to a 1-up lead over South Korea’s Sungjae Im and Colombia’s Sebastian Munoz.

But Munoz was the only player to birdie No. 13, and at the par-3 14th Im chipped in for birdie to halve the hole. Both Burns and Scheffler hit poor drives at the par-4 17th, and the International duo won with a par to tie the match. Neither team could eke ahead on No. 18.

“Sam was making some crazy putts here and there,” Munoz said. “They got momentum. They got even some luck on their side. We just had to dig deep, keep pushing, and trying to get a couple holes and ended up with a tie.”

In the day’s other match, Kevin Kisner and Cameron Young tied with Chile’s Mito Pereira and South Africa’s Christiaan Bezuidenhout.

The lopsided score leaves open the possibility that the Americans could lock up the Presidents Cup before Saturday is through. Eight points are up for grabs — with four foursomes (alternate-shot) matches and four more best-ball — and the U.S. team is just 7 1/2 away from clinching victory.

“I feel like tomorrow is the big day,” he said. “We have to keep in touch for Sunday, and we have a lot of gap to recover from.”