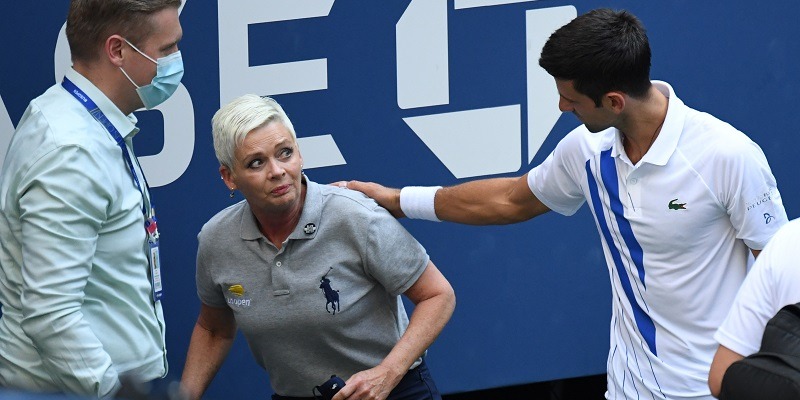 Top-seeded Novak Djokovic defaulted his fourth-round match at the U.S. Open after hitting a tennis ball in anger that smacked a line judge in the face.

Djokovic was behind 6-5 to Spain’s Pablo Carreno Busta in the opening set when the incident happened immediately after he lost a game.

During a changeover, Djokovic hit the ball with a decent amount of velocity toward the line judge and it hit the woman directly in the face.

The woman screamed out in pain and fell to the ground. Djokovic walked over to see if she was OK.

Officials discussed the incident on the court and ruled Djokovic had to default the match despite the Serbian pleading he should be allowed to continue.

“In accordance with the Grand Slam rulebook, following his actions of intentionally hitting a ball dangerously or recklessly within the court or hitting a ball with negligent disregard of the consequences, the US Open tournament referee defaulted Novak Djokovic from the 2020 US Open,” the USTA said in an statement. “Because he was defaulted, Djokovic will lose all ranking points earned at the US Open and will be fined the prize money won at the tournament in addition to any or all fines levied with respect to the offending incident.”

Djokovic, 33, was seen leaving the grounds without speaking to the media.

Djokovic held a 5-4 lead and had three set points before losing that game and the next prior to the incident.

The default marks Djokovic’s first defeat of 2020 after 26 consecutive victories. He was aiming to win his 18th Grand Slam title and was the overwhelming favorite to win his fourth U.S. Open with both Rafael Nadal and Roger Federer missing the event.