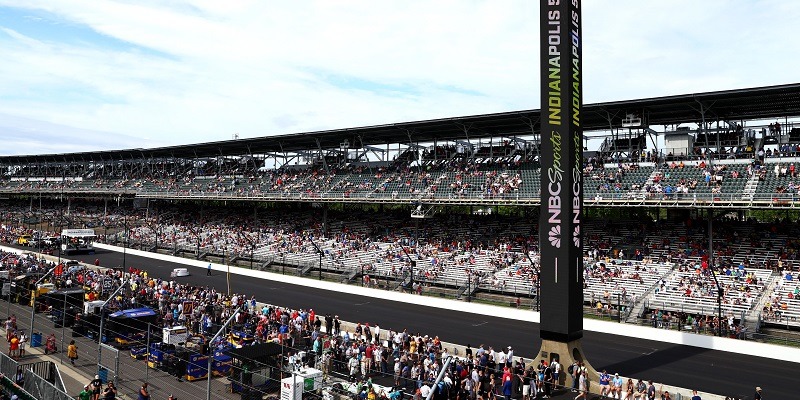 INDIANAPOLIS — After a day full of strategy, drama and one driver dominating up front, the Indianapolis 500 came down to a 13-lap shootout for the honor to drink the winner’s milk in Victory Lane, and it likely will go down as one of the greatest finishes in the 103-year history of the race.
Alexander Rossi and Simon Pagenaud traded the lead over those final 13 laps four times, but ultimately Pagenaud held on for his first Indy 500 victory, the 18th for team owner Roger Penske.

“It’s been such an intense race, I think we led most of the race,” Pagenaud said on the NBC broadcast after the race. “… I want to thank the fans, and I’m really happy.”
“It’s a dream come true,” he added. “A lifetime trying to achieve this. The milk motivated me. I was just focused on the job, man.”
Rossi was lined up first in his Honda-powered car on the late restart, with the Frenchman Pagenaud on his heels in a Chevrolet, but Pagenaud had been leading most of the day, and he blew past Rossi into Turn 1.
But then Rossi counterattacked into Turn 1 on the next lap and got past Pagenaud, but Pagenaud got him back the following lap.
Then it was a cat-and-mouse game to the finish, with Pagenaud diving to the inside coming out of the turns to cut off Rossi’s preferred passing line.
But Rossi popped out wide into Turn 1 with three laps to go to edge past Pagenaud and get back in the lead. Pagenaud had one final charge left in him, and he took the lead back into Turn 3 with 1 ¼ laps to go.
“Quite frankly I wasn’t really worried about getting back, I was just worried about the rhythm, when to get him back to finish first,” Pagenaud said afterward.
Rossi tried in vain to get back to the lead, but Pagenaud held him off as the two zig-zagged around the track.
“We had the better car,” Rossi said after the race. “… But it is what it is.”
“Nothing else matters but winning,” he added. “This one will be hard to get over.”
The race started under overcast skies with Pagenaud starting from the pole.
With 17 Indy 500 wins coming in, Penske’s team is always a pre-race favorite, and with Pagenaud, series leader Josef Newgarden and former 500 winners Will Power and Helio Castroneves in the field, that was the case again. All but Castroneves has won the IndyCar Series season title, and Castroneves has won the 500 three times.
Pagenaud got off to a good start and held the lead for the first 32 laps before pitting.
But both Power and Castroneves made mistakes on pit road, costing them track position and depriving Pagenaud of teammates on his tail to help protect the lead for the team.
With a relatively cool track, the early laps were fast until rookie Colton Herta’s car suffered a failure and brought out the first caution on Lap 6.
Otherwise the beginning of the race was uneventful as the cars and drivers settled into a rhythm for the long slog of 200 laps around the 2.5-mile quad oval, but with the threat of rain looming.
The Chevrolet-powered cars showed a clear advantage in qualifying, taking the first four spots before Herta qualified fifth in his Honda-powered machine. Indy 500 qualifying is a format where one car at a time runs four laps to post a speed and the drivers are lined up on the 33-car grid based on that.
With every car running a Dallara chassis and Firestone tires, the gap between engine makers was apparent through the first pit stops of the race, with Chevrolets running in first through fifth place.
After the round of stops, Pagenaud was back out front with Power running second.
But the Hondas were getting better fuel mileage and its drivers were setting up to make the race distance on five stops while some of the front-running Chevrolets were likely to sweat to the finish hoping they had enough fuel.
A late caution threw that strategy in the trash can.
Rossi had taken the lead on Lap 176, and almost immediately, Sebastien Bourdais and Graham Rahal crashed bringing out a caution, and ultimately a red flag, on Lap 181. Zach Veach and Felix Rosenqvist also were taken out by the crash and the cleanup was extensive. The red flag lasted 18 minutes.
–By K. Lee Davis, Field Level Media (@KdotLeeDavis)