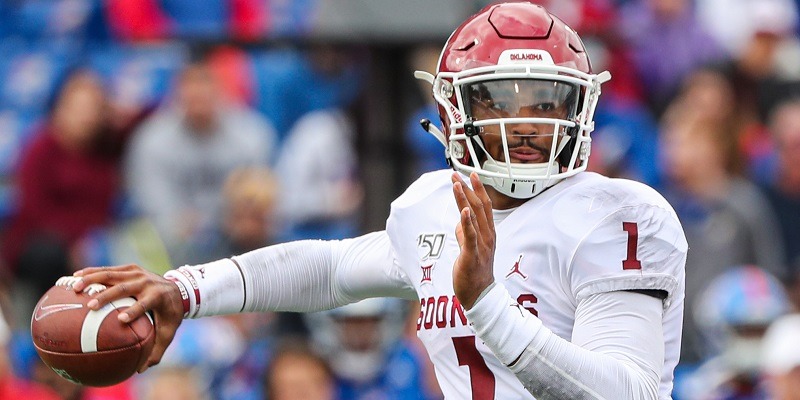 Oklahoma Sooners quarterback Jalen Hurts hasn’t yet played against the Texas Longhorns, but he has played in plenty of big-time rivalry games.

Texas’ Sam Ehlinger has experience against the Sooners, including beating Oklahoma in their regular-season matchup a year ago.

The two quarterbacks will be front and center Saturday when No. 6 Oklahoma faces the No. 11 Longhorns in the Red River Showdown in Dallas’ Cotton Bowl.

Hurts was a bit dismissive when talking about the rivalry, pointing to his history in big games at Alabama before transferring to the Sooners for his final season of eligibility.

“I played in the Iron Bowl,” Hurts said. “I played in big games before. I’ll be all right.”

Hurts has been shown a narrow focus so far at Oklahoma, stressing constant improvement and not showing distraction regarding big games or outside storylines.

There was a time when Hurts, who grew up in Houston, dreamed of being a Longhorn. He admired Vince Young and thought he could have similar success.

But Texas wound up instead recruiting Shane Buechele, and Hurts found a home at Alabama, where he was 26-2 as a starter and helped the Crimson Tide to a pair of College Football Playoff appearances.

So far at Oklahoma, Hurts has been even better than he was in his time at Alabama, helping the Sooners to a 5-0 start, throwing for 1,523 yards and 14 touchdowns with just two interceptions.

He also has rushed for 499 yards and seven touchdowns.

“They’ve got a few more quarterback-designed runs with Jalen because he’s so big and strong,” Texas coach Tom Herman said. “I think probably just the fact that they’re running the football (effectively), and he’s running it every time I look up, and it feels like he’s been running for 100 yards a game.

“Kyler (Murray) and Baker (Mayfield) could certainly do it, but that was not something they hung their hat on. With Jalen, he’s playing so well throwing the football that the designed runs become that much more difficult to stop.”

Murray and Mayfield, the Sooners’ past two quarterbacks, won the past two Heisman Trophies.

While Hurts has vaulted into the Heisman discussion early in the season, Ehlinger has received less acclaim.

A strong performance Saturday, though, could lift him into the national discussion as well.

The junior’s running output hasn’t been what Hurts’ has been, but he’s been just as effective throwing the ball, with 1,448 yards and 17 touchdowns with just two interceptions.

“The numbers speak for themselves. You got quality in terms of the short, intermediate passing game, completion percentage and getting it into playmakers’ hands,” Oklahoma defensive coordinator Alex Grinch said. “And then also the ability to throw the ball up in jump-ball situations and situations where receivers are behind defensive backs.

The teams split last season, with the Longhorns winning in October but the Sooners taking the Big 12 Championship Game.

Last season, the Longhorns were a bit of an upstart, and the win vaulted them back into the forefront in college football.

This season, Texas is right there, entering the game with only the narrow early-season loss to LSU blemishing their resume.

“When we play our best, we can go toe to toe with anybody in the country,” Herman said. “I think there’s a lot more confidence in that statement than last year’s team had.”